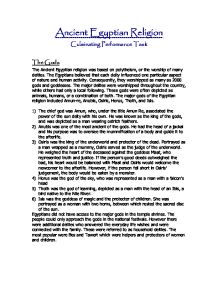 Ancient Egyptian Religion Culminating Performance Task The Gods The Ancient Egyptian religion was based on polytheism, or the worship of many deities. The Egyptians believed that each deity influenced one particular aspect of nature and human activity. Consequently, they worshipped as many as 2000 gods and goddesses. The major deities were worshipped throughout the country, while others had only a local following. These gods were often depicted as animals, humans, or a combination of both. The major gods of the Egyptian religion included Amun-re, Anubis, Osiris, Horus, Thoth, and Isis. 1) The chief god was Amun, who, under the title Amun Re, associated the power of the sun deity with his own. He was known as the king of the gods, and was depicted as a man wearing ostrich feathers. 2) Anubis was one of the most ancient of the gods. He had the head of a jackal and his purpose was to oversee the mummification of a body and guide it to the afterlife. 3) Osiris was the king of the underworld and protector of the dead. Portrayed as a man wrapped as a mummy, Osiris served as the judge of the underworld. He weighed the heart of the deceased against the goddess Maat, who represented truth and justice. If the person's good deeds outweighed the bad, his heart would be balanced with Maat and Osiris would welcome the newcomer to the afterlife. ...read more.

Priests could wear only white linen and sandals made from papyrus. During temple duty, the priest shaved off all his bodily hair, even the eyebrows. He was required to carry out main services at dawn, midday, and night, which consisted of washing, the anointment, and the feeding of the deity with offerings. The priest also served as the intermediary between the worshipper and the god. Only the members of the priesthood were allowed to enter the temple beyond the outer court. The ordinary worshipper had to stop at the entrance. Therefore, when a devotee brought offerings, it was given to the priest who carried it into the temple. All temples were surrounded by a wall with small windows to which worshippers could come and whisper their prayers or leave notes for the god. The priest who was on duty communicated the worshipper's prayers to the god. Mummification Basic to any religion is the belief regarding death and the afterlife, or human destiny. The Egyptians believed that three spirits were released from a person at death. One was the life force, called the ka, the other represented the characteristics of the individual, called the ba, and the third symbolized the immortality of the deceased, the akh. Together, these spirits enabled the person to exist in the afterlife. In order for the spirits to survive, however, the dead body had to be preserved through the process of mummification. ...read more.

Ankh One of the most powerful religious symbols of Ancient Egypt was the ankh. Portrayed in the shape of a key, this symbol stands for life or living and is connected with Egyptian gods such as Osiris and Isis. Most gods would appear to have possessed the ankh, to symbolise immortality, and it is thus often referred to as the Key of Life. The loop of the ankh is considered to be the feminine, while the T shape is considered to be the masculine. Together, these two sacred symbols reflect a continued existence. The Egyptians wore the ankh as an amulet to prolong life on earth, and were buried with it to ensure their 'life to come' in the afterworld. Festivals The Egyptians participated in several religious festivals. Each temple had a calendar of its feasts. One of the most important festivals was The Feast of Opet. Centered in Thebes, this festival was usually held around the time of the flooding of the Nile. Theban citizens celebrated the almighty god Amun. Because of the flooding, work was temporarily suspended in fields. The people joined in a dramatic procession honoring Amun that began at Karnak Temple and ended at Luxor Temple. Another annual religious festival was the Beautiful Feast of the Valley. This feast, again centered in Thebes, allowed the living to commune with their loved ones in the afterworld. It was held in late May or June. The procession of the goddess Hathor was also a widely celebrated religious festival. ...read more.