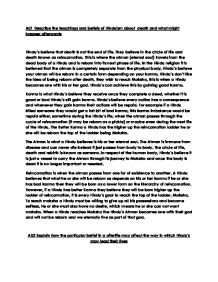 A01 Describe the teachings and beliefs of Hinduism about death and what might happen afterwards Hindu's believe that death is not the end of life. They believe in the circle of life and death known as reincarnation. This is where the atman (eternal soul) travels from the dead body of a Hindu and is reborn into its next phase of life. In the Hindu religion it is believed that the atman is completely separate from the physical body. Hindu's believe your atman will be reborn in a certain form depending on your karma. Hindu's don't like the idea of being reborn after death, they wish to reach Moksha, this is when a Hindu becomes one with his or her god. Hindu's can achieve this by gaining good karma. Karma is what Hindu's believe they receive once they complete a deed, whether it is good or bad Hindu's still gain karma. Hindu's believe every action has a consequence and whenever they gain karma their actions will be repaid. For example if a Hindu killed someone they would get a fair bit of bad karma, this karma imbalance would be repaid either, sometime during the Hindu's life, when the atman passes through the cycle of reincarnation (it may be reborn as a pickle) or maybe even during the next life of the Hindu. The Better Karma a Hindu has the higher up the reincarnation ladder he or she will be reborn the top of the ladder being Moksha. ...read more.

It will mean that Hindu's will try in their live to gain more good karma and complete good deeds to do this. This will lead a Hindu in his or her life as the Hindu will constantly be trying to achieve the best karma they possibly can so they can obtain a high ranked form in their atman's next life. Hindu's believe that if they are reborn with bad karma they will be born into a poor family or disabled. People have argued that this attitude which comes with the Hindu religion could make Hindu's harsh towards poor and disabled people. Some people believe that this will make Hindu's feel as if people with bad lives have gotten themselves into that situation and they do not need help. For Hindu's death is not the end. It marks the separation of the atman from the soul. The funeral takes as soon as possible after the death, usually before sunset. This is for reasons of Hygiene. If the dead body is male it is washed and cleaned by men and women if the body is female. Cremation is the most common way of dealing with the body, however burial is accepted if the dead person is under the age of puberty, a pregnant women or someone admired as a saint. These people are considered to have sacred qualities which set them apart from the rest of humanity which means they don't have to have the spirits released in the same way. ...read more.

However, unless someone is completely free of desire there will be something they want but because they will not allow themselves to obtain what they want they will become unhappy. For a person to be truly happy they must live by desire and impulse this way they will have everything they want and could ask for nothing more. However, if they have to face judgement they will have to come to terms with what they have done wrong in their lives. However some people do not believe in the theory of judgement and because of this they believe they don't have to live their lives by any rules. Some of these people could become murderers, rapists or wife-beaters. If the theory of judgement and punishment or reward after death was proven, these people would more than likely change the ways they live their lives. Some Hindu's will enjoy their lives others will focus on being good and working towards what they believe is the afterlife. Some Hindu's will achieve both this is a rare situation in which a Hindu is free of desire or in which they have no regard for the laws of their religion. Overall I believe that people should live their lives however they feel like but keep within the laws. I also, believe that the only judgement people receive is that of the law in this current life. ...read more.