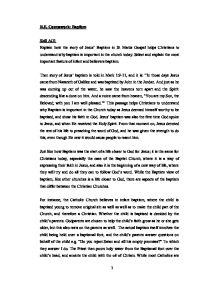 R.E. Coursework: Baptism Skill AO1 Explain how the story of Jesus' Baptism in St Marks Gospel helps Christians to understand why baptism is important in the church today. Select and explain the most important feature of infant and believers baptism. Then story of Jesus' baptism is told in Mark 1:9-11, and it is: "In those days Jesus came from Nazareth of Galilee and was baptized by John in the Jordan. And just as he was coming up out of the water, he saw the heavens torn apart and the Spirit descending like a dove on him. And a voice came from heaven, "You are my Son, the Beloved; with you I am well pleased."" This passage helps Christians to understand why Baptism is important in the Church today as Jesus deemed himself worthy to be baptised, and show his faith in God. Jesus' baptism was also the first time God spoke to Jesus, and when He received the Holy Spirit. From that moment on, Jesus devoted the rest of his life to preaching the word of God, and he was given the strength to do this, even though He new it would cause people to resent him. ...read more.

I think this as most people who were baptised into Catholicism were done so as babies, and therefore they might have very little faith later in life. However those baptised in the Baptist church wished to do so to show their faith. Therefore I would say a larger percentage of Baptists act on their faith than Catholics, that isn't to say most Catholics aren't influenced by their faith. The Catholic Church in my opinion has stricter teachings than the Baptist Church, for instance the Catholic Church teaches abortion totally wrong and it is sinful to get an abortion. However the Baptist Church does not forbid abortions, but they do ask that the woman thinks about what Jesus would want her to do, and should a woman get an abortion when she believes Jesus wouldn't her to, she would be aware that she failed the promise she made to Jesus at her Baptism. I would say in this situation that Baptists would probably act more on their faith in this situation that Catholics mainly because their faith allows them to go either way based on their own judgement, yet a Catholics faith simply tells them no, so matter how a Catholic feels on the issue of abortion it is a sin. ...read more.