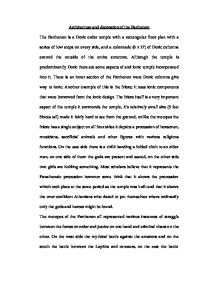 Architecture and decoration of the Parthenon.

Architecture and decoration of the Parthenon The Parthenon is a Doric order temple with a rectangular floor plan with a series of low steps on every side, and a colonnade (8 x 17) of Doric columns around the outside of the entire structure. Although the temple is predominantly Doric there are some aspects of and ionic temple incorporated into it. There is an inner section of the Parthenon were Doric columns give way to ionic. Another example of this is the frieze; it uses ionic components that were borrowed from the ionic design. The frieze itself is a very important aspect of the temple it surrounds the temple, it's relatively small size (3 feet 5inces tall) made it fairly hard to see from the ground, unlike the metopes the frieze has a single subject on all four sides it depicts a procession of horsemen, musicians, sacrificial animals and other figures with various religious functions. ...read more.

On the west side the mythical battle against the amazons and on the south the battle between the Lapiths and centaurs, on the east the battle between the gods and the giants and on the north the Greeks verses the Trojans. The interior has three chambers. The pronaos leads to the cellar, and that leads to the opisthodomas. Originally the rear chamber was called the Parthenon, (chamber of the virgin) while the cellar was known as Naos Hecatompedos. The Athenians eventually just started the Parthenon after the rear chamber. Windows show the statue of Athena from the outside and around the east door. At the front and rear of the building, within the outer colonnade were two porticoes, the pronaos and opisthodomos, with six columns each. ...read more.

This makes the building look as though it is different than what is actually going in the structure. When creating this temple, the idea was not to create a straight line, but to make something close to it that comes from the idea of a curve. These half straight, half curved lines give the illusion that the building is 'embracing the ground'. When a solid weight rests on a surface it gives the impression of an upward movement, this makes it look separate from the base. This is not what they were trying for with the Parthenon. They used the slightly curved aspect to make the weight look as though it is going towards the ground. This same idea is related to how the columns work as well. Optical distortion had been used for more than a hundred years before the Parthenon, but the Parthenon takes the idea to another level. ...read more.