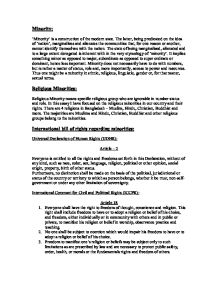 Attacks on religious minotirties in Bangaladesh

Minority: 'Minority' is a construction of the modern state. The latter, being predicated on the idea of 'nation', marginalizes and alienates the communities that, for one reason or another, cannot identify themselves with the nation. The state of being marginalised, alienated and to a large extent derogated is inherent with in the very etymology of 'minority'. It implies something minor as opposed to major, subordinate as opposed to super ordinate or dominant, hence less important. Minority does not necessarily have to do with numbers, but is rather a matter of status, role and, more importantly, access to power and resources. Thus one might be a minority in ethnic, religious, linguistic, gender or, for that matter, sexual terms. Religious Minorities: Religious Minority means specific religious group who are ignorable in number status and role. In this essay I have focused on the religious minorities in our country and their rights. There are 4 religions in Bangladesh - Muslim, Hindu, Christian, Buddhist and more. The majorities are Muslims and Hindu, Christian, Buddhist and other religious groups belong to the minorities. International bill of rights regarding minorities: Universal Declaration of Human Rights (UDHR): Article - 2 Everyone is entitled to all the rights and freedoms set forth in this Declaration, without of any kind, such as race, color, sex, language, religion, political or other opinion, social origin, property, birth of other status. Furthermore, no distinction shall be made on the basis of the political, jurisdictional or status of the country or territory to which as person belongs, whether it be trust, non-self-government or under any other limitation of sovereignty. International Covenant for Civil and Political Rights (ICCPR): Article 18 1. Everyone shall have the right to freedom of thought, conscience and religion. This right shall include freedom to have or to adopt a religion or belief of his choice, and freedom, either individually or in community with others and in public or private, to manifest his religion or belief in worship, observance practice and teaching. 2. ...read more.

Electoral politics and violence: Majoritarian democracy has turned politics into a game of numbers Human beings and communities have been turned into vote banks and constituencies. This dehumanizing of politics took an extremely ugly form in the parlamentiary election held on 1 October. The majority community, especially the Hindus, were the major targets. The reason for this violence are not limited to communal factors; rather the main factor behind this appears to be more political and structural. The Hindus are regarded as vote banks of AL, so they were targeted by the supporters of the BNP and its alliance partners. In instances, terrorists took advantage of the situation and indulged in extortion and looking of property. The violence started 15 days prior to the elections on 1 October and continued till about 27 October. This dampened the Durga Puja celebrations, he most important religious festival for the Hindus in Bengal. Newspaper scans of ten national newspapers indicated that from 15 September until 27 October about 330 incidents of violence against the Hindu community were reported. These includes cases of Rape, Killing, Physical torture, Plunder, damage of property, bomb explosions, arson, extortion. The table below illustrates the point. These incients reported from 57 districts. The divisional occurrence of violence (table 4) showed the highest renumber of incidents reported in Dhaka division. Khulna, Rajshahi and Barishal divisions experienced the next highest number of incidents and 1 to 15 October was the peak period of violence. Some of the newspaper reports describing acts of violence are given below to capture the plight and horror of the situation for the Hindu community. 15 year old Purnima Rani Shil was gang raped by 25-30 men. An armed gang attacked her house at night in East Delua village, Ullapura thana, Sirajganj on 8 October. They beat her parents mercilessly when they tried to stop the men. Purnima was taken to a nearby place and gang raped. ...read more.

Otherwise, they run the risk of becoming prisoner of their own identities and becoming isolated islands in an ocean of a dominant culture. 4. First, is the establishment of the firm rule of law and prevention of further recurrences of such incidents. However, this should be accomplished not by any foreign terms, organizations or interferences but through active cooperation, communication and amalgamation among different elements in Bangladeshi society. Different religions and sects have thrived in Bangladesh in peace and harmony over a protracted period of time. The minority issue, thus, has its solution in the very Bangladeshi way of life. 5. Secondly, sooner than later, Bangladesh has to take a proactive stand against the groups that are deliberately involved in the bizarre hate campaign and tarnishing her image in home and abroad. Engaging these groups that are no better than "cyber terrorists" needs carefully articulated strategy, changes in domestic and foreign policy and above all, the unabated support from all her citizens. 6. Bangladeshi Hindu /Christian is Bangladeshi at first; his/her religious identity comes next. The same is, of course, true about the majority Muslim population. Furthermore, the minority problem in a given state is unique in its own right and can only be solved within the existing socio-politico-cultural framework of the said state. Conclusion: The above review makes it evidently clear that seeds of violence against minority community are inherent within the structures of the modern state system and majoritarian democracy, which have led to the dehumanization of politics and turned human beings into vote banks and vote constituencies. Lack of accountability and transparency of the state machinery only makes the situation worse. To come out of this vortex of violence, the structures of state have to be democratized in the true sense of the world. Bangladesh ought to recognize the plurality of its culture and people. Undoubtedly, civil society has the major and the most important role to play in this respect. A politically and humanely conscious citizenry can provide the best safeguard for its own security by compelling the government to democratize itself and make its people oriented. ...read more.