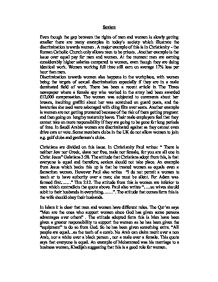 Attitudes towards sexism in Islam and Christianity

Sexism Even though the gap between the rights of men and women is slowly getting smaller there are many examples in today's society which illustrate the discrimination towards women . A major example of this is in Christianity - the Roman Catholic Church only allows men to be priests. .Another example is the issue over equal pay for men and women. At the moment men are earning considerably higher salaries compared to women, even though they are doing identical work. Women working full time still earn on average 17% less per hour than men. Discrimination towards women also happens in the workplace, with women being the targets of sexual discrimination especially if they are in a male dominated field of work. ...read more.

Their male employers feel that they cannot take on more responsibility if they are going to be gone for long periods of time. In Saudi Arabia women are discriminated against as they cannot even drive cars or vote. Some members clubs in the UK do not allow women to join e.g. golf clubs and gentlemen's clubs. Christians are divided on this issue. In Christianity Paul writes: " There is neither Jew nor Greek, slave nor free, male nor female, for you are all one in Christ Jesus" Galatians 3:28. The attitude that Christians adopt from this, is that everyone is equal and therefore, sexism should not take place. ...read more.

The attitude that comes form this is the wife should obey their husbands. In Islam it is clear that men and women have different roles. The Qur'an says "Men are the ones who support women since God has given some persons advantages over others" . The attitude adopted form this is Men have been given a greater responsibility to support the women as he has been given the "equipment" to do so from God. So he has been given something extra. "All people are equal...as the tooth of a comb. No Arab can claim merit over a non Arab, nor a white over a black person , nor a male over a female. This quote says that everyone is equal. An example of Mohammed was his marriage to a business woman, Khadijah suggesting that this is a good role for women. ...read more.