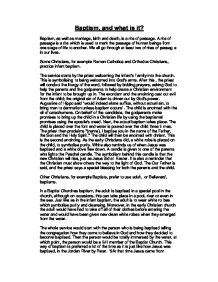 The service starts by the priest welcoming the infant's family into the church. This is symbolising to being welcomed into God's arms. After this, the priest will conduct the liturgy of the word, followed by bidding prayers, asking God to help the parents and the godparents to help create a Christian environment for the infant to be brought up in. The exorcism and the anointing cast out evil from the child; the original sin of Adam is driven out by God's power. Augustine of Hippo said ‘would indeed alone suffice, without actual sin, to bring man to damnation unless baptism occurs’. The child is anointed with the oil of catechumens. On behalf of the candidate, the godparents make promises to bring up the child in a Christian life by using the baptismal promises using the apostle's creed. Next, the actual baptism takes place. The child is placed over the font and water is poured over the child three times. The priest then proclaims "(name), I baptise you in the name of the Father, the Son and the Holy Spirit." The child will then be anointed with chrism. This is the second anointing. As the early Christians did, a white robe is placed on the child, to symbolise purity. White also reminds us of when Jesus was baptised and a white dove flew down. A candle is given to one of the parents who lights the Paschal candle. The symbolism behind this candle is that the new Christian will rise, just as Jesus did at Easter. It is also a reminder that the Christian must show others the way to the light of God. The Our Father is said, and the priest says a special blessing for both the parents and the child.

Other Christians, for example Baptists, prefer to use adult, or Believers', baptisms.

In a Baptist Churches baptism, the adult is baptised in a special pool in the church, although on occasions, this can take place in a pool, river or even in the sea. Just like as in the infant baptism, the adult is to wear white robes which symbolise purity and cleansing. Moreover, in the early Christian church the adult would have had to take off all of their clothes before entering the water and would have been given new clean white robes when they emerged from the water.

The whole service would start with the person who is being baptised telling the congregation how they came to believe in God and how they decided to become baptised. Then the person would be totally immersed by the water, at which point, the person would be a full member of the Baptist Church. This way of baptism is preferred a lot of the time as it is just like how Jesus was baptised, in the Jordan River by Peter. ‘9At that time Jesus came from Nazareth inGalilee and was baptized by John in the Jordan. 10As Jesus was coming up out of the water, he saw heaven being torn open and the Spirit descending on him like a dove. 11And a voice came from heaven: "You are my Son, whom I love; with you I am well pleased."  ‘

Both services are centred on the theme of water. Water cleanses the soul of sin, cleanses our bodies of dirt, and creates a new person in general. Another similarity is that both services, infant and adult, use white to symbolise the purity of being free of sins.

Adult baptism requires no sacrament of confirmation, because the adult is taking full responsibility for their decision, and would not have to renew their vows. This is unlike infant baptism, where at the age of 14 Christians will take their confirmation to renew their vows to God. This illustrates the main difference between the two services - that of the level of choice and commitment by the candidate.