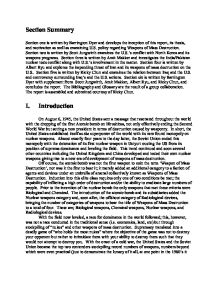 Barrington Dyer and develops the inception of this report, its thesis, and motivation as well as examining U.S. policy regarding Weapons of Mass Destruction.

Section Summary Section one is written by Barrington Dyer and develops the inception of this report, its thesis, and motivation as well as examining U.S. policy regarding Weapons of Mass Destruction. Section two is written by Scott Jungwirth examines the U.S.'s conflict with North Korea and its weapons programs. Section three is written by Amit Makker and investigates the India/Pakistan nuclear tests conflict along with U.S.'s involvement in the matter. Section four is written by Albert Ryu and explores the impending threat of Iran and its weapons of mass destruction on the U.S.. Section five is written by Ricky Chun and examines the relation between Iraq and the U.S. and controversy surrounding Iraq's and the U.S. actions. Section six is written by Barrington Dyer with supplement from Scott Jungwirth, Amit Makker, Albert Ryu, and Ricky Chun, and concludes the report. The Bibliography and Glossary are the result of a group collaboration. The report is assembled and submitted courtesy of Ricky Chun. I. Introduction On August 6, 1945, the United States sent a message that resonated throughout the world with the dropping of the first Atomic bomb on Hiroshima, not only effectively ending the Second World War but setting a new president in terms of destruction caused by weaponry. In short, the United States established itself as the superpower of the world with its new found monopoly on nuclear weapons. Almost exactly four years to the day latter, the Soviet Union ended this monopoly with the detonation of its first nuclear weapon in Ustyurt ousting the US from its position of supreme dominance and leveling the field. This trend continued and soon several other countries including the United Kingdom and China developed and tested their own nuclear weapons giving rise to a new era of development of weapons of mass destruction. Off course, the atomic bomb was not the first weapon to coin the term 'Weapon of Mass Destruction', nor was it the first to bear it; it merely added an additional category to a faction of agents and devices under an umbrella of arsenal collectively known as Weapons of Mass Destruction. ...read more.