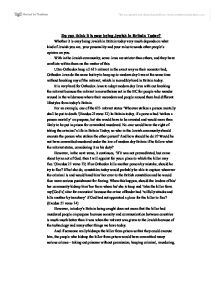 Being Jewish in Britain today

Do you think it is easy being Jewish in Britain Today? Whether it is easy being Jewish in Britain today very much depends on what kind of Jewish you are, your personality and your value towards other people's opinion on you. With in the Jewish community, some Jews are stricter than others, and they have conflicts within them on the matter of this. Ultra-Orthodox keep all 613 mitzvot in the exact way as their accentor had; Orthodox Jews do the same but try to keep up to modern day lives at the same time without breaking any of the mitzvot, which is incredibly hard in Britain today. It is very hard for Orthodox Jews to adopt modern day lives with out breaking the mitzvot because the mitzvot is nevertheless set in the BC for people who wonder around in the wilderness where their ascenders and people around them had different lifestyles form today's Britain. For an example, one of the 613 mitzvot states 'Whoever strikes a person mortally shall be put to death.'(Exodus 21verse 12) In Britain today, if a person had 'strikes a person mortally' on purpose, he/ she would have to be arrested and would more than likely to be put in prison for committed murdered. No-one would have the right of taking the criminal's life in Britain Today; so who in the Jewish community should execute the person who strikes the other person? And how should he do it? Would he not have committed murdered under the law of modern day Britain if he follow what the mitzvot states, considering it as his duty? However, in the next verse, it continues, 'If it was not premeditated, but came about by an act of God, then I will appoint for you a place to which the killer may flee.'(Exodus 21 verse 13) If an Orthodox kills another person by mistake, should he try to flee? ...read more.

There are still a few jobs Jewish could do without breaking the mitzvot such as teachers whom teach in school that do not have to go to school on Saturdays and self-employment. However, being considered as odd and dislike by many Christians (and about 90% of the population in Britain is Christians!), being a Jewish teacher in school might be dislike and not respected by their pupils because of their 'bizarre' clothing, their religion and even the family value on Jews that passed onto the pupil which would make a real pain for the Jewish teacher to teach. Beside, schools might not even want to employee the Jew! Perhaps, if the Jew is well educated enough, the only way for him to earn a living and to support his family in today's Britain is to be a teacher in Jewish schools - that is if he is well-educated! Despite the hardships they have on earning livings, most Jewish husbands have large family to feed. There are also special Jewish festivals Jews celebrate, and 'These are the festivals of the Lord, holy assemblies which you [Jews considered the 'you' is the Jews] shall proclaim at their appointed times.' (Leviticus 23 verse 4) Some of these are major celebrations when ordinary daily affairs, such as working, going to school and shopping must cease so that they could have a great deal of time and concentrate on prayer or celebration among their families. Others are less important occasion and daily life continues much as usual. The rest are simply days when special prayers are recited in the synagogue. As mention before, on major Jewish festivals, Jews have to be off from to school and work. Jews use the Biblical method of reckoning time, each new day starts at sunset, instead of at midnight (Genesis 1 verse 5), so all the Jewish festivals starts in the evening. For example, when the sun goes down on Friday, it is the Saturday for Jews which mean Sabbath start on Friday evening after sunset. ...read more.

Hitler made propaganda speeches telling people that Jews were lazy and does not deserve the rights of living. His propaganda speeches still remain in people's heart, Christians or non-Christians in Europe and I think some people in Britain as well since people are often reminded all these things during History and RS lessons in British schools unavoidably. This was proved when the graves of Jewish had Swastikas drawn on by the Anti-Semitism long after the Second World War. The Arabs Britain (there are people come from all over the world in Britain) might dislike Jews in Britain because the Jews had fought with the Arabs over the states the Israel after the second world war making many of the Arabs have no where to go. Other people hated or dislike Jews simply because they are Jews and because they are rare and 'odd' so there are problems that all Jews have to face, religious or not religious - being picked on. Certainly not all the people in Britain nor all the Christians dislike Jews; however, religious Jews might be offended by people who do not mean to for example, British school History and RS lessons teaching about the 11th century Crusade. This again, prove how being a Jew but not religious is easier than being a religious Jews in Britain today. In 1858, Jews were given the same political rights as member of Church of England in Britain. Their votes were now value but would people accept them as their prime minister just because they have given the rights officially? However, these things that non-religious Jews face are faced by many races of people who are not native British and people of colours and these are rare and small. So I would not say it is particular difficult for a non-religious Jews to live in Britain today compare to a non-Jew. But being a religious Jews is certainly not easy in today's Britain. ...read more.