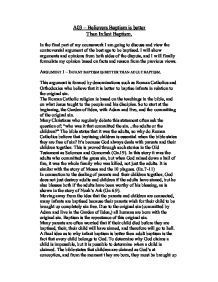 A03 - Believers Baptism is better Than Infant Baptism. In the final part of my coursework I am going to discuss and view the controversial argument of the best age to be baptised. I will show arguments and opinions from both sides of the dispute, and I will finally formulate my opinion based on facts and reason from the previous views. ARGUMENT 1 - INFANT BAPTISM IS BETTER THAN ADULT BAPTISM. This argument is formed by denominations such as Roman Catholics and Orthodoxies who believe that it is better to baptise infants in relation to the original sin. The Roman Catholic religion is based on the teachings in the bible, and on what Jesus taught to the people and his disciples. So to start at the beginning, the Garden of Eden, with Adam and Eve, and the committing of the original sin. Many Christians who regularly debate this statement often ask the question of; "who was it that committed the sin...the adults or the children?" The bible states that it was the adults, so why do Roman Catholics believe that baptising children is essential when the bible states they are free of sin? ...read more.

A final idea as to why infant baptism is better then adult baptism is the fact that every child belongs to God. To determine why God claims a child is impossible, but it is possible to determine when a child is claimed. The bible states that children are claimed as God's at conception, and from the moment they are born, they must be brought up as a Christian in a Christian lifestyle and community, and the best way to do this is through baptism as an infant. ARGUMENT 2 - BELIEVERS (ADULT) BAPTISM IS BETTER THAN INFANT BAPTISM. The second argument is formed by denominations that only baptise adults, such as the Baptists, who believe that baptism is a choice, a responsibility, to be made only by the person who wishes it to. The Baptist community has few main beliefs as to why adults are the best people to be baptised, but they are very strong arguments. Many Baptists are concerned that it is not right for someone to be baptised unless they themselves understand what is happening to them. ...read more.

Also, you cannot have forgiveness without repentance. How can a baby or child repent? The Baptists believe that the sins of a baby cannot be buried with Christ because a baby has not repented. Which means a baby cannot be baptised. You cannot repent for an infant, just like you cannot repent for anyone else, because you have not sinned. Baptists believe that infant baptism denies that forgiveness comes after repentance; it denies that we believe first and then are saved, therefore it denies the cross. My Opinion. I have not yet been baptised, so it is fair for me to make a judgement on these two opinions. I will not make my argument based just on my personal view and beliefs, but on the facts I have read and the statements I have listened to. I believe that when God made humans, he gave them the gift of free will, and gave it for a reason. I believe God wants us to make the right decisions in life, although he does not always expect us to makes the right ones. If he wished for us to have every decision made for us, we would not be blessed with such a gift. Although infant baptism ...read more.