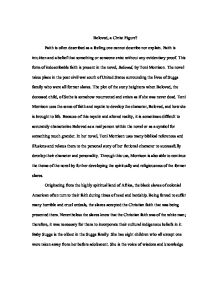 Beloved, a Christ Figure? Faith is often described as a feeling one cannot describe nor explain. Faith is intuition and a belief that something or someone exist without any evidentiary proof. This form of indescribable faith is present in the novel, Beloved, by Toni Morrison. The novel takes place in the post civil war south of United States surrounding the lives of Suggs family who were all former slaves. The plot of the story heightens when Beloved, the deceased child, of Sethe is somehow resurrected and exists as if she was never dead. Toni Morrison uses the sense of faith and mystic to develop the character, Beloved, and how she is brought to life. Because of this mystic and altered reality, it is sometimes difficult to accurately characterize Beloved as a real person within the novel or as a symbol for something much grander. In her novel, Toni Morrison uses many biblical references and illusions and relates them to the personal story of her fictional character to successfully develop their character and personality. Through this use, Morrison is also able to continue the theme of the novel by further developing the spiritually and religiousness of the former slaves. ...read more.

Toni Morrison states, "A fully dressed woman walked out of the water. She barely gained the dry bank of the stream before she sat down and leaned against a mulberry tree," (50). The resurrection of Beloved is very mystical and could only be described as supernatural. Toni Morrison uses the illusion of Beloved coming out of the water as if she is a baby being baptized. Morrison also implies using this illusion that it is through water, Beloved is able to be resurrected such as a Christian is able to have a new life after they are baptized. Like the newly baptized baby dying and living again through baptism, Beloved's resurrection can only be believed through faith. Through this illusion, Morrison is able to communicate the fact that Beloved's rebirth should be questioned in the literal sense, but be accepted as if it was a religious or spiritually phenomenon. Before the American Civil War, there was a law passed to prevent slaves to run away known as the Fugitive Slave Law. The law states that if a slave is found even in a free state, they must be return to their owner in the south United States. ...read more.

Beloved like Jesus Christ comes back to life after death and she leaves like Christ's Ascension after spending a short time on Earth. The most noticeable reference that Toni Morrison makes is in the epigraph as she states, "I will call them my people, which were not my people; and her beloved which was not beloved," (Romans 9:25). As Christ loved the people of Israel and call them his own, Beloved loved Sethe and her family even though Sethe killed her. Although it is bold statement to compare Beloved to Jesus Christ, the son of God, this claim does not exist without proof. During his crucifixion, Jesus Christ makes a plea to his father to forgive the people that are killing him and to bless them. Similar to Jesus Christ Beloved forgives her mother and loves mother regardless of the fact that her mother killed her. Jesus Christ's life exist only in the supernatural, and his life past on through age by the records of his disciple. To many people Beloved, the entirety of her existence and her departure are mysteries that no one could ever solve. Her life is only present in those who remembers her, but as Toni Morrison in the last pages of the novel, "This is not a story to pass on," (275). ...read more.