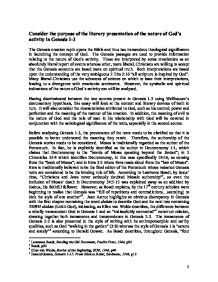 Bereshit, the first word in Genesis translates to &quot;in a beginning&quot;

Consider the purpose of the literary presentation of the nature of God's activity in Genesis 1-3 The Genesis creation myth opens the Bible and thus has tremendous theological significance in launching the concept of God. The Genesis passages are used to provide information relating to the nature of God's activity. These are interpreted by some creationists as an absolutely literal report of events whereas other, more liberal, Christians are willing to accept that the Genesis accounts are based more on spiritual truth. Both interpretations are based upon the understanding of the very ambiguous 2 Tim 3:16 "all scripture is inspired by God". Many liberal Christians use the advances of science on which to base their interpretations, leading to a divergence with creationist sentiments. However, the symbolic and spiritual indications of the nature of God's activity can still be analysed. Having discriminated between the two sources present in Genesis 1-3 using Wellhausen's documentary hypothesis, this essay will look at the context and literary devices of both in turn. It will also consider the characteristics attributed to God, such as his control, power and perfection and the meaning of the manner of his creation. In addition, the meaning of evil to the nature of God and the role of man in his relationship with God will be covered in conjunction with the aetiological significance of the texts, especially in the second source. Before analysing Genesis 1-3, the provenance of the texts needs to be clarified so that it is possible to better understand the meaning they retain. Therefore, the authorship of the Genesis stories needs to be considered. Moses is traditionally regarded as the author of the Pentateuch. In fact, he is explicitly identified as the author in Deuteronomy 1:1, which claims that Deuteronomy is the "words of Moses speaking beyond the Jordan"; in 2 Chronicles 25:4 which identifies Deuteronomy, in this case specifically 24:16, as coming from the "book of Moses"; and in Ezra 3:2 where Ezra reads aloud from the "law of Moses". ...read more.

This reference further affirms that there is no struggle or competition and displays the fact that God is absolutely unchallenged. The separation of dry land from the seas is the next act. Here God says "let the water under the sky be gathered to one place...let dry ground appear" (1:9). Gowan says the boundaries' limits are "an affirmation of God's control"48. Everything God has done in the first three days involves separation - the dark from the light, the high water from the low water and now dry land from the seas. It seems reasonable to say that Gowan's statement about setting limits works for all of God's separation acts. God also tells the land to "produce vegetation" (1:11). Gowan decides that the Priestly source thought of "the earth's vegetation as a part of God's provision of space in which the land animals will live"48. He goes on to say, "the reader is reminded that God put regularity and predictability into his world"48. This conforms to the theme of having an ordered and omnipotent, sovereign God but it also reflects the politics of the time. The exile of the Jewish people was causing them problems and therefore, the idea that everything comes from God, and thus is perfect, provides them with reason, comfort, and a feeling of solidarity. This is highlighted in recurring phrase "according to their kind"49, which amplifies the organization and order in the world. Perry focuses upon the author who explicitly ascribes the creation of vegetation to God. He also describes the focus on the monotheistic God throughout the Priestly account because the author constantly demonstrates creation to be by God, shown by the repetition of phrases such as "God created"50. This is due to the Priestly source worrying about "the seductive glitter of Babylon's glittering polytheistic culture"51. The Priestly author's account of the fourth day is simple and straightforward, dealing only with the creation of the celestial bodies; the sun, moon and the stars. ...read more.

However, despite God appearing to be vengeful, von Rad argues that "for the first time we see the Creator as the preserver!"113. Bonhoeffer elaborates upon this, saying that God "accepts men as those who are fallen. He does not compromise them...God's activity keeps pace with man"114. Drane explains this by stating that "man is incomplete without God. They are intended for fellowship with him"115. A good example of this is when God "made garments of skin" (3:21) after their sinning had taken place. Boadt uses this act to show that "God remains tenderly"116 showing loving concern for his creation. Gowan agrees, noting that the "relationship is maintained by a sorrowing God"117. However, this makes God more personal by giving him emotions. God is shown to be omnipotent and omniscient in Genesis 1-3 primarily because of the creation of the universe. He is also shown to be benevolent and compassionate because of the manner in which he treats man, particularly in the Yahwistic account. These characteristics are very evident in traditional Christian beliefs. In Genesis 2-3, God is portrayed as a very personal, anthropomorphic God, who is "walking in the garden" (3:8). This contrasts strongly with the very transcendent God present in Genesis 1. However, van Wolde combines the two qualities in her interpretation of the construct relation of YHWH elohim. The Yahwist and Priestly sources do agree that God alone created the universe, but according to Grisez, "the metaphysical difficulties attending that cosmological dimension have prompted its abandonment by some religious writers; and Christian discourse may then be taken to be essentially and solely moral discourse."118. Therefore, the explicit qualities of God described in Genesis 1-3, such as his power and perfection, may only be spiritual truths, as it is widely accepted that the world was not created in the seven days as shown in the Priestly account. Furthermore, as everything in Genesis is relative to man, objective observations about God cannot be made. It is not possible for man to comprehend God and the nature of his activity. ...read more.