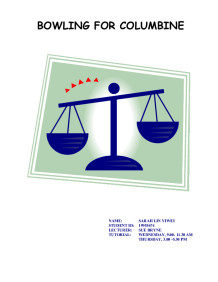 Bowling for Columbine In the recent film "Bowling for Columbine," Michael Moore claims that fear drives people to violence; a short animation clip is also used by Michael Moore to depict the history of the United States in the documentary. The animation brought out a number of issues that set people thinking. Issues on race, fear and violence are also discussed in the documentary (as well as the interview of Oprah Winfrey and Michael Moore.)It is shocking to realise how people have got involved in the culture of fear, and violence. The discrimination of the blacks in America is also discussed in the film. Having watched this documentary, I was totally appalled. Thoughts went through my head, and questions were left unanswered. Are people treated justly and equally? It seems to me that the answer is no. The world did not seem safe anymore, and an example of that being that bullets were made easily available in stores such as "K-mart". "It's an American tradition; it's an American responsibility to be armed. If you're not armed you're not responsible." is a quote given by a militia member. It seems to me that the Americans are caught up in their own world only worried about themselves. There is some form of self-obsession going on in the country, as people only care about their own well being, and another example is a quote given by a female militia member "Because, being a female, for one, I felt it was important to be able to protect myself with the best means possible. ...read more.

It seemingly appears to me that people are blinded by fear and sunk into the culture of killing. The shocking issues is that the public has irrational fear of things that did not matter as much, for instance , instead of being worried about issues such as poverty and how to overcome it, people are more self-centred and paranoid. A quote by Arthur Busch demonstrates what I have said: "The American people are conditioned by network TV, by local news, to believe that their communities are much more dangerous than they actually are. For example, here in this community crime has decreased every year for the past eight years. Yet gun ownership, particularly handgun ownership, is on the increase." The media also played a huge role in fear-provoking the citizens of the United States, the quote provided by Professor Barry Glassner "... I did discovered that the murder rate had gone down by 20%, the coverage, that is how many murders are on the evening news, had went up by 600%". This issue bothered me as it gives me the impression that people are becoming frightened of the wrong issues and the ignorance of the world out there just made it seem more terrifying. Violence is also one of the major concerns in American, the quote supporting this statement "I just think the States view of everything is fighting. ...read more.

It makes people wonder what our world has turned into. A breeding ground for more violence and discrimination? Probably. On the other hand, there are also those who believe that the issues of violence and ownerships of guns are appropriate. They are the NRA. Although they claim that guns are only used for self defence, there are also those who have stolen guns for other purposes other than self defence. The misuse of gun could be avoided if they were made less available to the people. Innocent lives are sacrificed due to a misuse of guns, for example the killings of student in Columbine. In my opinion, "The biggest problem has been the gun possession by these adolescents in suburbia." The six year old boy killing his classmate as the gun was of easy accessibility. All of these could have been avoided if fewer guns are involved. And with fewer guns, there would be less violence, more peace and security for the citizens of America. Thus in conclusion, I believe that more effort could be put in to stop all the issues of fear, killings and discrimination. Most of the issues could be avoided if people stopped being so paranoid and self-centred. I believe that the issues on killings and violence can be resolved peacefully without the involvement of guns. If people were to trust each other more, the world would be a much better place to live in. ?? ?? ?? ?? MCD- LANGUAGE IN THE MEDIA NAME: SARAH LIN YIWEI 2 ...read more.