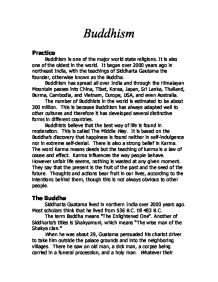 Buddhism and The Buddha.

Buddhism Practice Buddhism is one of the major world state religions. It is also one of the oldest in the world. It began over 2000 years ago in northeast India, with the teachings of Siddharta Gautama the founder, otherwise known as the Buddha. Buddhism has spread all over India and through the Himalayan Mountain passes into China, Tibet, Korea, Japan, Sri Lanka, Thailand, Burma, Cambodia, and Vietnam, Europe, USA, and even Australia. The number of Buddhists in the world is estimated to be about 300 million. This is because Buddhism has always adapted well to other cultures and therefore it has developed several distinctive forms in different countries. Buddhists believe that the best way of life is found in moderation. This is called The Middle Way. It is based on the Buddha's discovery that happiness is found neither in self-indulgence nor in extreme self-denial. There is also a strong belief in Karma. The word Karma means deeds but the teaching of karma is a law of cause and effect. Karma influences the way people behave. However unfair life seems, nothing is wasted at any given moment. ...read more.

until he overcame various obstacles that where obstructing his path to the enlightenment. It is said that he asked mother earth herself to bear witness to his worthiness to the enlightenment. This is why in Buddhist art the Buddha is sometimes shown touching the earth with his right hand. At the heart of this spiritual experience was an understanding of how everything changes all the time. Gautama believed that the root of all suffering caused by change is desire and ignorance. According to him, knowing this is what means to be enlightened. The place where he was "enlightened" is in Bihar, India, and it has become a center of Buddhist pilgrimage since Buddha's death. Buddha's Teaching Gautama knew that other people would find it difficult to endure the search, which he himself had endured, and to experience the truths, which he had experienced. So he did not start preaching immediately. Finally he went into a deer park at Sarnath where he met five holy men whom he had known before his holy experiences. These immediately noticed that there was something different about Gautama and so they were prepared to listen to what he had to say. ...read more.

These mounds are characteristic monuments of Buddhism all over the Buddhist world. The place where Buddha died, as well as the places of his birth and enlightenment and the park where he made his first sermon have all become important places of pilgrimage for Buddhists. Such places generally have two kind of statues of the Buddha. One is generally in his lotus posiion and the other is of the Buddha lying on his right side peacefully during his death. Islam The Beginning Islam was first brought to the world by the prophet Muhammad in the A.D. 600. Muhammad was an Arab born in the city of Makkah (Mecca) about 570 A.D. He believed that he had been sent to warn and guide people anf to show them the right way to worship God (Allah). He taught people that there was only one God and that he was his messenger. Those who believe his teachings are called muslims. Muslim is an arabic word for "one who submits to God" and Islam is an arabic word for "submission". Islam is one of the world's largest and fastest growing religions. About one sixth of the world's population today are muslims. The Muslim world is mainly central Asia, the Middle East, North Africa, Indonesia, Bangladesh, India, Pakistan and the eastern parts of Europe. Muhammad's companion's preserved the relevations that ...read more.