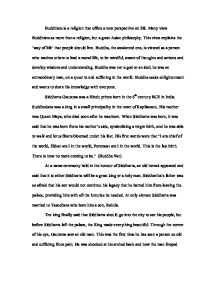 Buddhism is a religion that offers a new perspective on life. Many view Buddhism as more than a religion, but a great Asian philosophy.

Buddhism is a religion that offers a new perspective on life. Many view Buddhism as more than a religion, but a great Asian philosophy. This view explains the 'way of life' that people should live. Buddha, the awakened one, is viewed as a person who teaches others to lead a moral life, to be mindful, aware of thoughts and actions and develop wisdom and understanding. Buddha was not a god or an idol, he was an extraordinary man, on a quest to end suffering in the world. Buddha seeks enlightenment and wants to share his knowledge with everyone. Siddharta Gautama was a Hindu prince born in the 6th century BCE in India. Suddhodana was a king in a small principality in the town of Kapilacastu. His mother was Queen Maya, who died soon after he was born. When Siddharta was born, it was said that he was born from his mother's side, symbolizing a virgin birth, and he was able to walk and lotus floors bloomed under his feet. His first words were that "I am chief of the world, Eldest am I in the world, Foremost am I in the world. This is the last birth. There is now no more coming to be." (Buddha Net) ...read more.

The rational of the Eightfold Path has a specific design to be simple and effective. "The eight requirements will eliminate suffering by correcting false values and giving true knowledge of life's meaning." (Ross, 91) The path consisted of: "1. Right understanding means to know and understand the Four Noble Truths, 2. Right attitude means to have three kinds of thoughts or attitudes: (i) Thoughts of renunciation or an attitude of "letting go". (ii) Thoughts of goodwill to others, which are opposed to ill will. (iii) Thoughts of harmlessness, as opposed to cruelty. 3. Right speech deals with refraining from falsehood, such as telling lies or not telling the truth; tale-bearing or saying bad things about other people; harsh words and frivolous talk such as gossiping. 4. Right action deals with refraining from killing, stealing, and sexual misconduct. 5. Right livelihood deals with the five kinds of trade which should be avoided in order to lead a noble life. They are trading in arms (weapons), living beings (breeding animals for slaughter), intoxicating drinks, and poison. 6. Right effort has four parts using meditation: (i) To try to stop unwholesome thoughts that has arisen (ii) To prevent unwholesome thoughts from arising. (iii) To try to develop good thoughts (iv) ...read more.

Moved primarily South and West covering Indochina and Ceylon (Sri-Lanka). Moved Primarily North and West, covering China, Korea, Japan, and Tibet. Early work written in Pali (e.g. kamma, dhamma). Early texts are in Sanskrit (e.g. karma, dharma) (Brown) Buddhism has spread largely across Asia, although, throughout the 20th century, Buddhism has been one of the fastest growing religions. Compared to the other religions Buddhism is ranked as number 4 prior to Christianity, Islam, Hinduism, and Atheist. There are 350 million Buddhist, which is 6% of the world's population, as shown on the pie chart below. (Buddha Net) Buddhism has left its mark on today's society. This form of religion is centered on reaching nirvana. The absolute and eternal state where there is no hatred or harm that can be done. By understanding Buddha's life and the sacrifices he made to end the suffering people can give their total devotion to obtaining nirvana. Even though, Buddhism is not centered on a "God" or "prayer" they reach a salvation similar to Christianity. They meditate and focus onto themselves trying to strike a balance between spiritual life and the world of duality. The spread of Buddhism has been constant through out the centuries. Buddhism has had a great impact on Asian culture, although the west is accepting this new "way of life" as a solution of many social problems. ...read more.