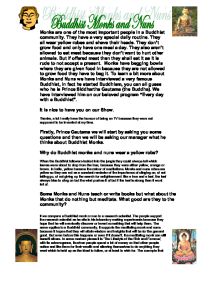 Monks are one of the most important people in a Buddhist community. They have a very special daily routine. They all wear yellow robes and shave their heads. They don't grow food and only have one meal a day. They also aren't allowed to eat meat because they don't want to hurt other animals. But if offered meat then they shall eat it as it is rude to not accept a present. Monks have begging bowls where they are given food in because they are not allowed to grow food they have to beg it. To learn a bit more about Monks and Nuns we have interviewed a very famous Buddhist, in fact he started Buddhism, you can all guess who he is Prince Siddhartha Gautama (the Buddha). We have interviewed him on our beloved program "Every day with a Buddhist". It is nice to have you on our Show. Thanks, a lot I really have the honour of being on TV because they were not supposed to be invented at my time. Firstly, Prince Gautama we will start by asking you some questions and then we will be asking our manager what he thinks about Buddhist Monks. ...read more.

Try to pick a teacher who has a good reputation, a person who you know and one who knows the Buddha's teachings. Thank you Precious King for being with us today. From what I have just heard about meditations, I will start practising it right away. I mean it doesn't harm you and it doesn't really waste your time and it is better than sitting and watching TV because watching TV is sometimes a waste of time but Meditating is helping your mind. You never know I might start meditating and then I'll probably start making very good interviews and RS homeworks. I don't see how meditation could harm you but the expert said it. So I think it could be dangerous but how I don't know. Also how does meditation help you reach enlightenment? Does meditation help you solve maths equations as well or is meditation just like reading you can't solve a maths equation by reading but it may help you solve it. And how could there be different types of meditation. How could you practise different types of meditation? Has each one got its own way of freeing your mind from desires? Meditation seems a bit mysterious, it is a bit like magic, you meditate and suddenly you find enlightement. ...read more.