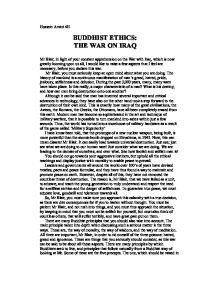 Buddist ethics - The war on Iraq.

Hossein Amini 4H BUDDHIST ETHICS: THE WAR ON IRAQ Mr Blair, in light of your constant apprehension on the War with Iraq, which is now greatly looming upon us all, I would like to raise a few aspects that I feel are necessary, before you declare this war. Mr Blair, you must seriously keep an open mind about what you are doing. The history of mankind is a continuous manifestation of man's greed, hatred, pride, jealousy, selfishness and delusion. During the past 3,000 years, many, many wars have taken place. Is this really, a major characteristic of a man? What is his destiny, and how can men bring destruction onto one another? Although it can be said that man has invented several important and critical advances in technology, they have also on the other hand took a step forward to the destruction of their own kind. This is exactly how many of the great civilisations, the Aztecs, the Romans, the Greeks, the Ottomans, have all been completely erased from this earth. Modern man has become so sophisticated in the art and technique of military warfare, that it is possible to turn mankind into ashes within just a few seconds. Thus, the world has turned into a storehouse of military hardware as a result of the game called 'Military Superiority' I have know been told, that the prototype of a new nuclear weapon, being built, is more powerful than the atomic bomb dropped on Hiroshima, in 1945. Now, this can mean disaster Mr Blair. It can easily lead towards universal destruction. Just see; just see what we are doing to our human race! Just consider what we are doing. We are leading to the demise of ourselves, and over what. See how foolish and selfish man is! You should not go towards your aggressive instincts, but uphold all the ethical teachings and display justice with morality to enable peace to prevail. ...read more.

What is essentially right for one isn't for the other. The paramitas, which includes Sila, Kshanti, Prajna, Samadhi, Dana and Virya, are not rules, but are pointers, to the life of happiness, healthiness, and wisdom. A wise person will be able to know what to do in a situation, and how to do it. However, the main point is that this takes skill, rather than just blind faith, and obedience to rules. For Buddhists, intention is the most important aspect and by this intention, which means skilful, one can hope to achieve wisdom. So essentially, skilful, is the means of intention. A Buddhist attitude to this problem of Iraq is very complex, Mr Blair. First of all, a Buddhist should never be an aggressor, even if it means protecting one's own religion. He must always try his best to avoid any kind of violent act. Sometimes he may be forced to go to war by others who do not accept the concept of brotherhood, as was taught by the Buddha. He may however, join the struggle of fellow man from oppression, and here, he is duty-bound, since it is the struggle for peace and freedom, but only in defence. He cannot be blamed, therefore, for this act, since he is in an act of justified defence. However, if everybody followed the Buddha's example, then there would be no need for war in this world, so hence, It is the duty of every cultured man to find all possible ways and means to settle disputes in a peaceful manner, without declaring war to kill his fellow men. The Buddha did not teach His followers to surrender to any form of evil power, be it man or supernatural being. Indeed, with reason and science, man could conquer nature, and yet man has not yet even secured his own life. Why is life so much in danger? ...read more.

There are three types of Buddhism Mr Blair, and each has different way of approaching the situation, although they are similar: Theravada Buddhism Theravada Buddhists, have many scriptures from early Buddhists. The Tipitaka (in Pali is widely used as a resource for Ethics, since it is an understanding of past lives. Theravada has more ethical points of view from the Buddha, and has more traditional types of view. As in, many of the concepts taken on board, are old ones, and they don't really have much flexibility. Despite this, they are concrete based, and are very bold in context. So, Theravada is the basic teachings of the Buddha, and has the more traditional ethics rather than liberal ethics Mahayana Buddhism Mahayana Buddhism is more liberal, and appeals to lay people more than any other. The ideas contained within it are more on thoughtful progress, and intellectual thinking. Buddha's texts are used as the basis for understanding, and progress is made from there. Mahayana Buddhists accept the fact that Theravada has some principles which should be acknowledged, but believe their vehicle is greater. So, to sum up, Mahayana is a more flexible and more comprehensive style of Theravada Buddhism, so it therefore has more flexible ethics. Tibetan Buddhism Tibetan Buddhism very much concentrates on ethics. Tibetans believe, that the world is a constant cycle of problems, and that these must be dealt with. Tibetans believe that if you have inner peace, external problems do not affect your deep sense of peace and tranquillity. In that state of mind you can deal with situations with calmness and reason, while keeping your inner happiness. So, Mr Blair, I hope that I have made a real effort to give my case on the war with Iraq. I do not ask you to definitely do what I suggested, but think about them. Become more aware of your surroundings, and do not hasten into practise. Think about the principles and ideas I have put forward, good luck! Dalai Lama ...read more.