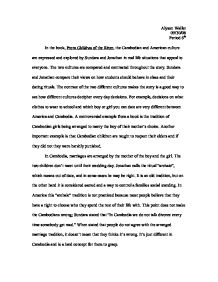 Alyson Waller 09/30/08 Period 6th In the book, From Children of the River, the Cambodian and American culture are expressed and explored by Sundara and Jonathan in real life situations that appeal to everyone. The two cultures are compared and contrasted throughout the story. Sundara and Jonathan compare their views on how students should behave in class and their dating rituals. The contrast of the two different cultures makes the story is a good way to see how different cultures decipher every day decisions. For example, decisions on what clothes to wear to school and which boy or girl you can date are very different between America and Cambodia. ...read more.

The two children don't meet until their wedding day. Jonathan calls the ritual "archaic", which means out of date, and in some cases he may be right. It is an old tradition, but on the other hand it is considered sacred and a way to control a families social standing. In America this "archaic" tradition is not practiced because most people believe that they have a right to choose who they spend the rest of their life with. This point does not make the Cambodians wrong; Sundara stated that "In Cambodia we do not talk divorce every time somebody get mad." ...read more.

In American culture, respect is not as honored as it is in other societies. For example, Sundara states that when the students argue with the teacher it makes her nervous because arguing is a sign of disrespect in Cambodia If she would have been disrespectful she would deserve to be punished. In American culture people are given a little more slack when it comes to being a bit outspoken. The story touches points on some important and controversial points of the differences between American and Cambodian culture. Knowing the differences between the two cultures makes a person more knowledgeable and comprehensible towards the reason why different cultures practice certain rituals. Understanding an unfamiliar culture only helps a person properly accept changes. ...read more.