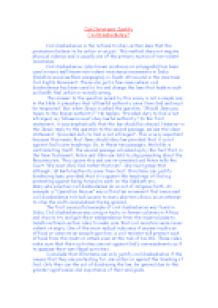 ﻿Can Christians Justify Civil Disobedience? Civil disobedience is the refusal to obey certain laws that the protesters believe to be unfair or unjust. This method does not require physical violence and is usually one of the primary tactics of non-violent resistance. Civil disobedience, (also known as ahimsa or satyagraha) has been used in many well known non-violent resistance movements in India (Gandhi?s social welfare campaigns), in South Africa and in the American Civil Rights Movement. These are just a few cases where civil disobedience has been used to try and change the laws that leaders such as Gandhi feel unfair or morally wrong. ...read more.

However in the Jesus? reply to the question to the second passage, we see the clear statement, ?provided duty to God is not infringed?. This is very important because this means that Jews should obey law provided that it is not against God?s core teachings. So, in these two passages, the bible is contradicting itself. The second passage is backed up by the fact that, in the New Testament, Peter and John are told to stop preaching about the Resurrection. They ignore this and are re-arrested and Peter tells the Court ?We must obey God rather that men?. ...read more.

Gandhi outlined certain rules to make sure that civil resisters were never violent or angry. One of the most radical rules was if anyone insults an official or commits an assault upon him, a civil resister will protect such official from the insult or attack even at the risk of his life. These rules make sure that their activities are not against God?s commandments as if to appease their own illegal activities. I conclude that Christians can only justify civil disobedience if the causes that they are protesting for, are unfair or against the teaching of God. Only then can the act of disobeying the law, be ignored due to the greater significance and importance of their end goals. ...read more.