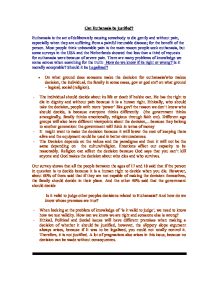 Can Euthanasia be justified?

Can Euthanasia be justified? Euthanasia is the act of deliberately causing somebody to die gently and without pain, especially when they are suffering from a painful incurable disease; for the benefit of the person. Most people think unbearable pain is the main reason people seek euthanasia, but some surveys in the USA and the Netherlands showed that less than a third of requests for euthanasia were because of severe pain. There are many problems of knowledge we come across when searching for the truth: How do we know if its right or wrong? Is it morally acceptable? Should it be Legalized? * On what ground does someone make the decision for euthanasia/who makes decision, the individual, the family in some cases, gov or god etc? on what ground - logical, social (religion). - The individual should decide about its life or death if he/she can. He has the right to die in dignity and without pain because it is a human right. Ethically, who should take the decision, people with more 'power' like gov? the reason we don't know who should decide, is because everyone thinks differently (the government thinks strategically, family thinks emotionally, religious through faith etc). Different age groups will also have different viewpoints about the decision,...because they belong to another generation: the government will think in terms of money - It might want to make the decision because it will lower the cost of keeping them alive and the equipment could be used in better circumstances. ...read more.

Is it right to put the responsibility on the doctors? - There are also Culture/religion restrictions - Less than 50% of religious people said that euthanasia should be legalized. whereas 100% of non religious people said that Euthanasia should be legalized. There is a clear 'cultural clash'. DEBATE ON AGAINST AND FOR - Euthanasia could be used as an excuse to kill people - But it could be kept under control with laws - There is no way being able to control every doctor. - Yes, but the process would be supervised to ensure security, and the family would have agreed and even when it isn't legal, people still do it. - Yes, the government is putting the family under pressure. - But without this, imagine if every single person terminally ill, handicapped, or in a coma was to be looked after using machines and medicine, even though these people are going to die. That is why the government would put a maximum of years on looking after people I comas and then euthanasia can take place, because no more room , time or money would be spent on these people. - But you cant interfere with God. He says that you cannot kill other people and that only he has the right to decide when someone dies. ...read more.

different laws for different levels. Reason says that if we 'know' the person won't heal... once again, what are our limits of us knowing knowledge. (science/technology/miracles!)(Some people in comas have cerebral activity). * What should the consequences be if someone does illegal E - prison? culture Consequences should be - (ARTICLE where doctor had to do it.. ask class) - different people who think differently - logical thing to do in situation and logically right. In Switzerland, Euthanasia Doctor Commits Suicide after Finding Patient He Killed Was Not Terminally Ill. He was charged with being financially motivated. "Making poisonous cocktails available has deviated into pure business, and medical reports are being misused as an excuse". He killed himself... he was just doing his job, fault of woman who lied to him, but she is dead, so society needs to blame someone. From this we can ask ourselves whether punishment is justified, because some doctors might just have agreed to help a suffering patient/ Conclusion Final legalizing decisions will always depends on different cultures in different part of the word, and different religions. If there is no way that the person will ever wake up or will wake up braindead. How do we know that it is defiantly not possible, with science in the future, to cure them? Is it right or wrong?? We won't know because people don't agree on the same premiscies and never will. But euthanasia can save (end suffering of family, money, time). Reason and Emotion, when balanced out appropriately ...read more.