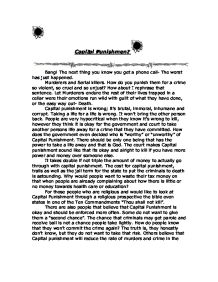 Bang! The next thing you know you get a phone call- The worst has just happened.

Murderers and Serial killers. How do you punish them for a crime so violent, so cruel and so unjust? How about I rephrase that sentence. Let Murderers endure the rest of their lives trapped in a cellar were their emotions run wild with guilt of what they have done, or the easy way out- Death.

Capital punishment is wrong; it’s brutal, immoral, inhumane and corrupt. Taking a life for a life is wrong. It won’t bring the other person back. People are very hypocritical when they know it’s wrong to kill, however they think it is okay for the government and court to take another persons life away for a crime that they have committed. How does the government even decided who is “worthy” or “unworthy” of Capital Punishment. There should be only one being that has the power to take a life away and that is God. The court makes Capital punishment sound like that its okay and alright to kill if you have more power and money over someone else.

It takes double if not triple the amount of money to actually go through with capital punishment. The cost for capital punishment, trails as well as the jail term for the state to put the criminals to death is astounding. Why would people want to waste their tax money on that when people are already complaining about how there is little or no money towards health care or education?

For those people who are religious and would like to look at Capital Punishment through a religious prospective the bible even states in one of the Ten Commandments “Thou shall not kill”.

There are also people that believe that Capital Punishment is okay and should be enforced more often. Some do not want to give them a “second chance”. The chance that criminals may get parole and receive bail is not a chance people take lightly. How do people know that they won’t commit the crime again? The truth is, they honestly don’t know, but they do not want to take that risk. Others believe that Capital punishment will reduce the rate of murders and crime in the

country or state. That is why they believe Capital Punishment is the answer.

Facts and studies however prove that Capital Punishment does not in fact decrease the amount of murders and crimes. The crime and death rate caused by murders have actually gone up since the early 70s’. In some states in the U.S.A that have the death penalty it actually shows a higher amount of murder rates then states with out Capital Punishment.

Some people also believe that it also depends on your race, social status, education and location of crime on whether or not you receive the death sentence.

Say you were the one who got that horrible phone call, someone close to you has just been murdered. How do you think you would act? Many people feel the need for justice. Some feel they get this justice by Capital Punishment. “An eye for an eye”… “A life for a life”. Revenge and payback for what that criminal has done. Don’t you think that you there has been enough unnecessary blood-shed already?         As I stated before in my opening statement death is the easy way out. With Capital Punishment you feel pain for a split second and then you die. Locked up in Jail, for the rest of your life, the pain of those criminals knowing that they will never have freedom, never be fully welcomed back into society and them knowing what crime they have committed and the guilt it shall bring upon themselves will be overwhelming. This is true revenge.

Society must voice their opinion about Capital Punishment. Put an end to this Violence, both inside and outside of the court. Revenge is much sweeter when you can see the effects on the person.