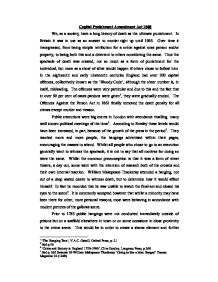 Capital Punishment Amendment Act 1868 We, as a society, have a long history of death as the ultimate punishment. In Britain it was in use as an answer to murder right up until 1965. Over time it transgressed, from being simple retribution for a crime against ones person and/or property, to being both this and a deterrent to others considering the same. Thus the spectacle of death was created, not so much as a form of punishment for the individual, but more as a show of what would happen if others chose to follow him. In the eighteenth and early nineteenth centuries England had over 200 capital offences, collectively known as the 'Bloody Code', although the sheer number is, in itself, misleading. The offences were very particular and due to this and the fact that in over 90 per cent of cases pardons were given1, they were gradually eroded. The Offences Against the Person Act in 1861 finally removed the death penalty for all crimes except murder and treason. Public executions were big events in London with attendance rivalling many well known political meetings of the time2. According to Emsley these levels would have been increased, in part, because of the growth of the press in the period3. ...read more.

This conclusion seems a little to obvious and easy to draw, rather like us today claiming that violent films equal violent people. To simplify the issue like this was to remove autonomy from the masses. This, unfortunately, is exactly what did happen however. Those who liked to see themselves as upstanding and civilised members of society began to question the motives and intentions of those who chose to attend executions. It became something which respectable people simply did not do and as such labelled those who went as rough, uncouth, villainous types, people to be feared and avoided. This is where the second argument for abolition stemmed from although the initial intention was for the complete removal of capital punishment, public or not. The abolitionists calling for an end to the death penalty took the 'disorder and immorality of the crowd'13to be the focal point in their argument because it would have been difficult to argue that it was not an effective remedy against re-offending. This was a mistake however; it was this constant complaining about the conduct of the masses that drew the legislative eye away from the death penalty as punishment in itself and allowed it to focus on the conclusion that the crowd should be removed to make it more effective14. ...read more.