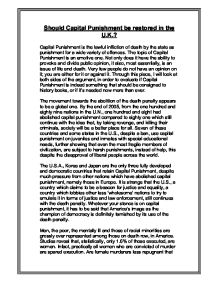 Should Capital Punishment be restored in the U.K.? Capital Punishment is the lawful infliction of death by the state as punishment for a wide variety of offences. The topic of Capital Punishment is an emotive one. Not only does it have the ability to provoke and divide public opinion, it also, most essentially, is an issue of life and death. Very few people do not have an opinion on it; you are either for it or against it. Through this piece, I will look at both sides of the argument, in order to evaluate if Capital Punishment is indeed something that should be consigned to history books, or if it's needed now more than ever. The movement towards the abolition of the death penalty appears to be a global one. By the end of 2005, from the one hundred and eighty nine nations in the U.N., one hundred and eight had abolished capital punishment compared to eighty one which still continue with the idea that, by taking revenge, and killing their criminals, society will be a better place for all. Seven of these countries and some states in the U.S., despite a ban, use capital punishment on juveniles and inmates with special educational needs, further showing that even ...read more.

Although it may be argued that the death penalty is a successful deterrent for would- be criminals, there is no proof that it is, even though this assumption seems intuitively correct. I would agree that, capital punishment is the only way that we know that a person can never commit crime again. It is a cause for public concern that sometimes, despite getting life sentences, people can escape with some as little as fifteen years in jail. A suitable solution to this would be tougher jail sentences and a life sentence which really means life. Only then can people feel safe and believe that criminals have been properly punished. The argument about the value of human life can be used by both sides of the debate. People who are in favour of the death penalty feel that, the victim's life has been taken from them and so exacting the highest punishment, that is their death, is the only way that we can acknowledge the high value of human life. On the other hand, those who support the abolition of capital punishment believe that even though the convicted person has murdered, and taken away someone's life, all life is sacred, and that taking away another person's life, even by the state, is wrong. ...read more.

Arguing that the cost of a criminal's permanent incarceration is too high is in my opinion, cheapening human life. It is like slapping a price tag on human life. The death penalty denies a basic human right, the right to life. Admittedly, criminals need to be punished, but to kill them achieves nothing except another death and killing them won't bring back the victim to life. It is understandable that supporters of capital punishment feel that it's safer when a convicted person is killed, that way, they can never attack again. However, the same result is achieved, if they were given a life sentence and restrictions were put in place to make sure that can not get out early. Although the criminal deservedly, should not get any special treatment, the inevitable media circus that follows trials where the person is going to be put to death is unfair to anyone, even a murderer. It also puts a lot of strain on the family of the person, and they are completely innocent. The desire to restore the death penalty is at its strongest when a diabolical and disgusting murder has just taken place, but capital punishment should never be restored in the U.K. Intellect must rule emotion, society should never have blood on its hands. ...read more.