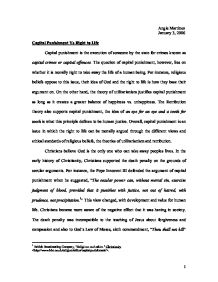 Capital Punishment Vs Right to Life

Angie Martinez January 3, 2006 Capital Punishment Vs Right to Life Capital punishment is the execution of someone by the state for crimes known as capital crimes or capital offences. The question of capital punishment, however, lies on whether it is morally right to take away the life of a human being. For instance, religious beliefs oppose to this issue, their idea of God and the right to life is how they base their argument on. On the other hand, the theory of utilitarianism justifies capital punishment as long as it creates a greater balance of happiness vs. unhappiness. The Retribution theory also supports capital punishment, the idea of an eye for an eye and a tooth for tooth is what this principle defines to be human justice. Overall, capital punishment is an issue in which the right to life can be morally argued through the different views and ethical standards of religious beliefs, the theories of utilitarianism and retribution. Christians believe God is the only one who can take away peoples lives. In the early history of Christianity, Christians supported the death penalty on the grounds of secular arguments. For instance, the Pope Innocent III defended the argument of capital punishment when he suggested, "The secular power can, without mortal sin, exercise judgment of blood, provided that it punishes with justice, not out of hatred, with prudence, not precipitation.1" This view changed, with development and value for human life. ...read more.

This is because, it will be benefit society with the deterring of crime and the offender will regret his/ her wrongdoings. The theory of utilitarianism however, does not always endorse that an act will produce the balance of happiness over unhappiness. If a criminal is condemned to the death penalty, it does not mean that it will stop crime from happening. Also, there is no accuracy that it will make an offender feel remorse for the wrong actions committed. Utilitarianism, does not base their argument on justice, instead their defense for capital punishment does not balances out the concern of human welfare. If punishing a criminal deters crime, then there is no reason for the offender to have the right to life. Overall, utilitarians subordinates the right to life argument, because for them punishment is a response to guilt and it what makes Capital punishment accurate in the basis of the balance of happiness over unhappiness. In general, Utilitarianism defends capital punishment, because it will ensure human welfare through the sense guilt that will produce to criminal offenders and the benefits that society will have. The theory of retribution is mostly based in human justice the ideology of an eye for an eye and a tooth for a tooth it's what subordinates their idea of the right to life. Retribution states three points: "All guilty people deserve to be punished, only guilty people deserve to be punished, guilty people deserve to be punished in proportion to the severity of their crime"6. ...read more.