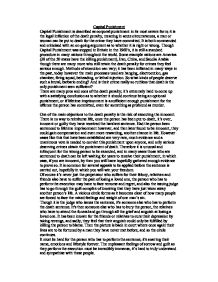 Capital Punishment Capital Punishment is described as corporal punishment in its most severe form; it is the legal infliction of the death penalty, meaning in acute circumstances, a man or woman can be put to death for the crime they have committed. It is both commended and criticised with an on-going argument as to whether it is right or wrong. Though Capital Punishment was stopped in Britain in the 1960's, it is still a standard procedure in many nations throughout the world. Some example nations are America (38 of the 50 states have the killing punishment), Iran, China, and Saudia Arabia though there are many more who still retain the death penalty for crimes they feel serious enough. Methods of execution can vary; it has been inflicted in many ways in the past, today however the main processes used are hanging, electrocution, gas chamber, firing squad, beheading, or lethal injection. So what kinds of people deserve such a brutal, barbaric ending? And is their crime really so ruthless that death is the only punishment seen sufficient? There are many pros and cons of the death penalty; it's extremely hard to come up with a satisfying conclusion as to whether it should continue being an optional punishment, or if lifetime imprisonment is a sufficient enough punishment for the offence the person has committed, even for something as profound as murder. One of the main objections to the death penalty is the risk of executing the innocent. There is no way to reimburse life, once the person has been put to death, it's over, innocent or guilty they have received the harshest sentence. Had the person been sentenced to lifetime imprisonment however, and then later found to be innocent, they could gain compensation and even more rewarding, another chance in life. However cases like this that have been established are very rare, much evidence and a unanimous vote is needed to convict this punishment upon anyone, and only serious deserving crimes obtain the punishment of death. ...read more.

Also reports have shown that some people find love in prison, is it really a punishment to be enclosed with your lover, the only person you would want to be enclosed with? It's hardly a huge penalty. Having the fear of the death penalty gives your conscience a reason to argue with your actions, it makes you think twice before continuing, and teaches others that the crime will not simply be overlooked and the seriousness of it. It also proves how strong and strict the law can and will be for justified crimes, teaching younger people not to do them through fear of what the consequence could be. The cost of running a prison furthermore is very expensive, good money is being spent on the well being of criminals oppose to it being spent on education, hospitals, environmental issues and the promotional aspect of reaching and stopping the younger generation from also ending up in prison. Though it may sound immoral, the truth is it's cheaper for a person to be executed than to be kept in prison. By executing all the people who performed a crime like murder, you are lowering the prison numbers, and so reducing the cost, therefore there is more money to spend on the areas that need and deserve it most. But surely by putting bad people in prison for a prolonged time, you are helping the world become a better place. By not killing the people and imprisoning them instead, you are still teaching them a lesson and yet by not killing them, you are not sinking to their level as well, and contradicting the law. It hopefully still brings the message across to the younger generation on what and what not to do, but just in a much more humane way. Also, with the sentence lighter, it will hopefully encourage people to come forward with information or even to confess to the crime. ...read more.

I disagree that people should be killed if the murder was performed in the heat of the moment e.g. in a fit of rage, jealousy or passion. This doesn't necessary mean that they are evil people, we all make mistakes when at the peaks of our emotions. Though they still killed someone so unless it can be proven as self-defence, they should still get a long sentence. The other crime which I feel is justified with the punishment of the death sentence is the kidnapping and torturing of another human being until they are barely alive. This is the work of monsters, not sane human beings; these people don't deserve to live. I think that if capital punishment was brought back to England then despite the obvious reason, I do believe it would save lives. People would be much more cautious about there actions, and wouldn't get themselves so frequently into positions where death could occur. For instance, it is general knowledge that when you perform a robbery you carry a gun. This is because if you do have to shoot and kill someone what's to worry about? So you may get a few more years but there's appeal, so what's the big deal about killing someone who gets in your way? If Capital Punishment was reinstated then I feel it would act as a deterrent to these kinds of people, and prove to save many more innocent ones. I think that five years on death row should be obligatory because if the convicted is truly guiltless, it gives them the time to reinstate themselves and their innocence, whereas if they are guilty, it still gives them the endearing prison sentence. I really don't believe that by killing these people we are bringing ourselves down to that level because no one could get that low. There a good vindicated reason for the death of these people, whereas their victims suffered for a bit of fun. ...read more.