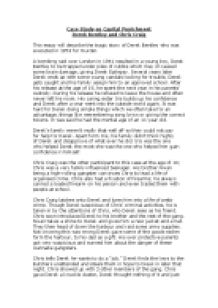 ﻿Case Study on Capital Punishment Derek Bentley and Chris Craig This essay will describe the tragic story of Derek Bentley who was executed in 1953 for murder. A bombing raid over London in 1941 resulted in a young boy, Derek Bentley to be trapped under piles of rubble which may of caused some brain damage, giving Derek Epilepsy. Several years later Derek ends up with some young vandals looking for trouble, Derek gets caught and his family assign him to an approved school. After his release at the age of 19, he spent the next year in his parents? custody. During his release he refused to leave the house and often never left his room. His caring sister Iris builds up his confidence and Derek after a year went into the outside world again. It was hard for Derek doing simple things which we often take for an advantage, things like remembering song lyrics or giving the correct tokens. ...read more.

They then head of down the harbour and raid some army supplies. Not knowing this was wrong Derek gave some of the goods stolen form the harbour, to his dad as a gift. His over protective parents got very suspicious and warned him about the danger of these wannabe gangsters. Chris tells Derek he wants to do a ?job.? Derek finds the keys to the Butchers unattended and steals them in hope to break in later that night. Chris showed up with 2 other members of the gang. Chris gave Derek a knuckle duster, Derek thought nothing of it and just accepted it as a gift. To their dismay the butcher is working late and Chris has his ideas on something bigger like a warehouse. The 2 other gang members disagreed and left. Derek not really able to make his own decisions goes along with Chris. The 2 youths were spotted entering the premises and the police were called. The police soon arrived and Sergeant Fairfax climbed to the roof, and managed to grab Bentley and told him he could leave if he so wished but he did not. ...read more.

Other evidence which may of lead to the jury?s decision was the fact that Derek was carrying a weapon on his person. Derek would also seem less convincing the jury because unlike Chris, Derek was unable to give persuading answers to the judge?s questions, not really surprising having the mental age of an 11 year old. The answers Chris gave were short sometimes saying as little as a word, it was obvious he didn?t care about what would happen to him and just wanted revenge for his brother. Derek on the other hand was confused by the questions asked, he sometimes agreed with things that weren?t necessarily true. His family created an appeal highlighting the facts that Derek shouldn?t have even been in court due to his mental age and the fact that he showed no intention of harming a police officer. Many people signed a petition they even got support from pc miles? wife. The appeal was rejected by the Home Secretary - Lord Goddard, and Derek was executed on 28 January 1953. ...read more.