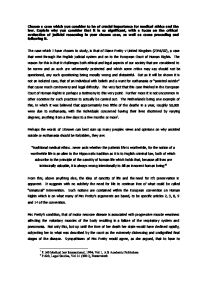 Choose a case which you consider to be of crucial importance for medical ethics and the law. Explain why you consider that it is so significant, with a focus on the critical evaluation of judicial reasoning in your chosen case, as well as cases preceding

Choose a case which you consider to be of crucial importance for medical ethics and the law. Explain why you consider that it is so significant, with a focus on the critical evaluation of judicial reasoning in your chosen case, as well as cases preceding and following it. The case which I have chosen to study, is that of Diane Pretty v United Kingdom (2346/02), a case that went through the English judicial system and on to the European Court of Human Rights. The reason for this is that it challenges both ethical and legal aspects of our society that are considered to be norms and as such are vehemently protected and which some critics may say should not be questioned, any such questioning being morally wrong and distasteful. But as it will be shown it is not an isolated case, that of an individual with beliefs and a want for euthanasia or "assisted suicide" that cause much controversy and legal difficulty. The very fact that this case finished in the European Court of Human Rights is perhaps a testimony to this very point. Further more it is not uncommon in other societies for such practices to actually be carried out. The Netherlands being one example of this, in which it was believed that approximately two fifths of the deaths in a year, roughly 50,000 were due to euthanasia, with the individuals concerned having their lives shortened by varying degrees, anything from a few days to a few months or more1. ...read more.

While it may be argued that in turn it ignores other important principles such as non-malfeasance, it may well be that over all this is the most beneficial of all options, not only to the patient but to society as a whole, relieving the individual, the relatives and society of the very real burden of having to care for such an individual. A utilitarian approach, but one that helps to justify the practice of euthanasia, or euthanasia in its passive form at the very least. Though a point to note is when some one is in a PSV can you really determine an individuals best interest, surely they will be indifferent to all that goes on. This highlights the idea of why "living wills" may be of some use, this is discussed below. Again looking at the idea of acting in the patient's best interests it is useful to look at the case of the conjoined twins6. Here it was deemed acceptable for a medical procedure to separate two twins, Jodie and Mary to be performed knowing that the weaker of them would die. The reasons for this were if they remained together they were both sure to die but should they be separated the stronger of the two would survive and live the remainder of it's life in better health. In effect it was removing the life sustaining equipment from the weaker twin so that it could be relieved from a short and somewhat troubled life, justified by saying that she would die not because she was intentionally killed, but because her own body cannot sustain her life7. ...read more.

In cases proceeding it there is a clear conceptual difference that appears. When the issue concerns passive euthanasia society and law can allow it, perhaps because in the case of refusing treatment it is the natural event that will be the factor that causes death, an event for which no moral blame need be attached to one single person. It alleviates the individual and family of their anguish, releases valuable medical resources that may make the difference in saving another's life, and can act as another source of "medicine" at the doctors disposal when acting in the patients best interest. The idea of "living wills" also arises, documents in which an individual can express their wishes and exercise their autonomy before an event occurs, providing more certainty for doctors and their patients. However when it comes to active euthanasia it brings about the idea of infringing areas of life that the criminal justice system has been designed to protect, the deliberate and wilful ending of a life. It is there for a reason to, to prevent involuntary acts of euthanasia. The idea of making someone kill you may be one perceptual step in the reasoning for it's continued denial. When the end result is the same though, it is perhaps bizarre how society can justify one method easier than the another, perhaps we spend to much time focusing on living, in which law and medicine have become intimately bound, to preserve and enhance our stake in the world while the issue of death still remains peripheral to this process10. ...read more.