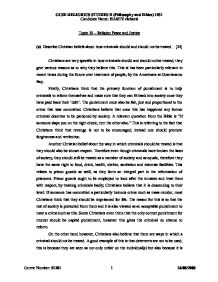 Topic 10 - Religion Peace and Justice (a) Describe Christian beliefs about how criminals should and should not be treated. [24] Christians are very specific in how criminals should and should not be treated; they give various reasons as to why they believe this. This is has been particularly relevant in recent times during the furore over treatment of people, by the Americans at Guantanamo Bay. Firstly, Christians think that the primary function of punishment is to help criminals to reform themselves and make sure that they can fit back into society once they have paid back their 'debt'. The punishment must also be fair, just and proportional to the crime that was committed. Christians believe that once this has happened any former criminal deserves to be pardoned by society. ...read more.

If someone has committed a particularly heinous crime such as mass-murder, most Christians think that they should be imprisoned for life. The reason for this is so that the rest of society is protected from them and it is also viewed as an acceptable punishment to meet a crime such as this. Some Christians even think that the only correct punishment for murder should be capital punishment, however this gives the criminal no chance to reform. On the other hand however, Christians also believe that there are ways in which a criminal should not be treated. A good example of this is that deterrents are not to be used; this is because they are seen as not only unfair on the individual(s) ...read more.

Christians also believe that it is not up to humans to judge others, that is God's business. An example of this from the New Testament is when Jesus was asked what to do with an adulterous woman, rather than answering the question directly he said; "Let him who is without sin cast the first stone". This is a very important example of where Christians are taught to be forgiving and not judgemental. A further quotation from the Bible to support this belief is; "Why do you look at the speck of sawdust in your brother's eye and yet pay no attention to the plank in your own eye?" Here the term 'brother' refers to anyone; it is explaining how people should not be quick to accuse others without a sound reason. ?? ?? ?? ?? GCSE RELIGIOUS STUDIES B (Philosophy and Ethics) 1931 Candidate Name: HARTZ richard Centre Number: 51201 1 26/08/2008 ...read more.