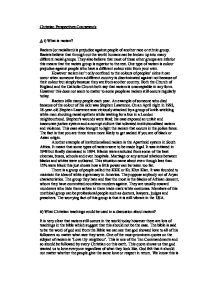 Christian Perspectives Coursework A i) What is racism? Racism (or racialism) is prejudice against people of another race or ethnic group. Racists believe that through out the world humans can be broken up into many different racial groups. They also believe that most of these other groups are inferior this means that the racists group is superior to the rest. One type of racism is colour prejudice against people who have a different colour skin from your own. However racism isn't only confined to the colours of peoples' skins it can occur when someone from a different country is discriminated against not because of their colour but simply because they are from another country. Both the Church of England and the Catholic Church both say that racism is unacceptable in any form. However this does not seem to matter to some people as racism still occurs regularly today. Racism kills many people each year. An example of someone who died because of the colour of his skin was Stephen Lawrence. On an April night in 1993, 18-year-old Stephen Lawrence was viciously attacked by a group of knife-wielding white men shouting racial epithets while waiting for a bus in a London neighbourhood. Stephen's wounds were fatal; his case exposed an unfair and inaccurate justice system and a corrupt culture that tolerated institutionalized racism and violence. This case also brought to light the racism that occurs in the police force. ...read more.

For example a black person may expect to earn up to half of what a white person earned, many blacks could not vote and certain areas of cities may be for 'whites only'. He wanted to change the situation for blacks but he wanted to do it non-violently. His first area he decided to change was the buses, as on the buses blacks were only allowed to sit at the back and if asked to give up their seat for a white person they had to do so. Martin Luther King heard a story of how a tired black woman had refused to give up her seat; she had been arrested because this was classed as an offence. After he heard this he decided to conduct a 'bus boycott'. This was the start of the Civil Rights Movement of which Martin Luther King became the leader in 1960.In 1956 the government passed a law making it illegal to segregate people on buses. This is an example of how a Christian has put his belief about racism into action in a non-violent way in this case it has worked. Martin Luther King also organised demonstrations and marches (all of these non-violent) and in 1962 he asked president Kennedy for greater understanding of blacks .He led a march the next year with 1/4 million people, the march included blacks and whites in Washington. His aim: to ease the situation of black peple, by protesting in favour of a new civil rights bill. ...read more.

poverty-stricken Bantustans, bereft of their South African citizenship by a violence that has turned them into aliens in their motherland; we are talking about the violence of the migratory labour system which forces men to live an unnatural existence in single-sex hostels, with deleterious consequences for black family life; ... I refer to the legalised violence of detention without trial and of arbitrary banning. I have said many times before that this institutionalised structural violence of South Africa is making many blacks desperate as they despair of peaceful change, for until 1960 since 1912 their political groups have struggled valiantly to bring about change by peaceful means. But what has been the result? A growing intransigence on the part of the authorities, replying with teargas, police dogs, police bullets and death; an escalating violence that has shut out the possibility of peaceful negotiation... Many blacks have despaired of peaceful change. I have warned that when people become desperate, then they will use desperate methods. Desmond Tutu felt that violence was the only option. I feel that in some cases violence may be necessary in some form or another if nothing else is working because if your life is in danger and you need to save yourself then you cannot really continue to be a pacifist. However in general I feel that one should follow Martin Luther King's example and fight for your rights whether it be for your colour or sex or religion pacifism is really the only way to achieve your goals. ...read more.