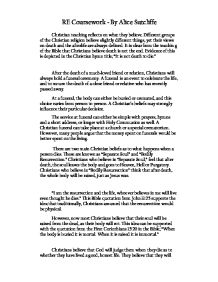 RE Coursework ~ By Alice Sutcliffe Christian teaching reflects on what they believe. Different groups of the Christian religion believe slightly different things, yet their views on death and the afterlife are always defined. It is clear from the teaching of the Bible that Christians believe death is not the end. Evidence of this is depicted in the Christian hymn title; "It is not death to die." After the death of a much~loved friend or relation, Christians will always hold a funeral ceremony. A funeral is an event to celebrate the life, and to mourn the death of a close friend or relative who has recently passed away. At a funeral, the body can either be buried or cremated, and this choice varies from person to person. A Christian's beliefs may strongly influence their particular decision. The service at funeral can either be simple with prayers, hymns and a short address, or longer with Holy Communion as well. A Christian funeral can take place at a church or a special crematorium. However, many people argue that the money spent on funerals would be better spent on the living. There are two main Christian beliefs as to what happens when a person dies. ...read more.

They believe that at Purgatory, people work off their sins before they go to heaven. Although many Christians believe that you go to heaven, hell or purgatory straight away after you die, in contrast to this, other Christians believe that on the day of judgement all the dead will be raised for God to judge them then. This can be supported by the First Corinthians 15:52 from the Bible; "For the trumpet shall sounds and the dead will be raised imperishable and we will be changed." This view is also depicted in the Christian Hymn; "How shall we stand on that great day?" The first verse particularly supports this idea as it reads; "The judgement has set, the books have been opened; How shall we stand in that great day, When every thought, and word, and action, God, the righteous Judge, shall weigh?" In conclusion to what Christians believe about death and the afterlife, there are various different views that Christians have. However, although some Christians may have slightly different views than others, they are all supported by the teaching of the Bible. These views may effect the decisions of Christians every day, in relation to how serious their faith is. ...read more.

However, I believe that people shouldn't have to rely on the bible to tell them things such as 'Thou shall not kill' because it is obvious that is wrong. Their own conscience and knowledge of human morals should be able to tell if an action is right or wrong. I appreciate that a belief in the afterlife will affect the way a follower of that religion lives their life but I would hope that it does not stop them from leading a happy existence. As well as Christianity, followers of other religions may also in a way sacrifice their lives in relation to a particular belief in the afterlife. For example, Buddhists believe in reincarnation. They believe that in the next life, you will either be punished or rewarded for your actions in the previous one. They feel that all animals are sacred and must not be harmed in any way, so if a Buddhist were to eat meat, they would probably live your next life as an unimportant being. After weighing up each side of the argument, I still strongly agree with the above statement. Nevertheless, I do understand other points of view, including that of a Christian. It is clear to see why a devoted Christian would dedicate their life to helping others out of their own will. They may do this because they believe life is short, but the afterlife goes on forever. ...read more.