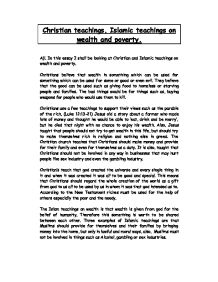 Christian teachings, Islamic teachings on wealth and poverty. A)i. In this essay I shall be looking at Christian and Islamic teachings on wealth and poverty. Christians believe that wealth in something which can be used for something which can be used for some or good or even evil. They believe that the good can be used such as giving food to homeless or starving people and families. The bad things would be for things such as, buying weapons for people who would use them to kill. Christians use a few teachings to support their views such as the parable of the rich, (Luke 12:13-21) Jesus old a story about a farmer who made lots of money and thought he would be able to 'eat, drink and be merry', but he died that night with no chance to enjoy his wealth. Also, Jesus taught that people should not try to get wealth in this life, but should try to make themselves rich in religion and nothing else in greed. ...read more.

Doing this ensures that good things on earth are fairy shared out. They used the zakah a tax which Muslims must pay for the poor it is the third pillar and why they must give it is because they help the poor. The hadith is also used which is collections of scriptures which are regarded as important tool for determining the Muslim way of life which is very important to any Muslim. The sadaqah is the Islamic term which means voluntary charity. A)ii. World Development is where people of today are trying to change the poverty of the world. They are trying to change the world poverty so that we all can live in peace. There are 1.2 million people in the world that live on less than a $1 a day. A LEDC is a less economically developed country and also often called the third world. Less economically developed countries are countries which suffer from conditions of poverty, conflict, political issues and also social strength. ...read more.