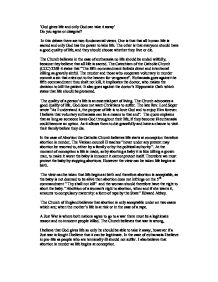 ‘God gives life and only God can take it away’

Do you agree or disagree?

In this debate there are two fundamental views. One is that that all human life is sacred and only God has the power to take life. The other is that everyone should have a good quality of life, and they should choose whether they live or die.

The Church believes in the case of euthanasia no life should be ended wilfully, because they believe that all life is sacred. The Catechism of the Catholic Church (CCC) 2268 it states that “The fifth commandment forbids direct and intentional killing as gravely sinful. The murder and those who cooperate voluntary in murder commit a sin that cries out to the heaven for vengeance”. Euthanasia goes against the fifth commandment thou shalt not kill, it implicates the doctor, who makes the decision to kill the patient. It also goes against the doctor’s Hippocratic Oath which states that life should be protected.

The quality of a person’s life is an essential part of living. The Church advocates a good quality of life, God does not want Christians to suffer. The late Rev. Lord Soper wrote “As I understand it, the purpose of life is to love God and to enjoy Him forever. I believe that voluntary euthanasia can be a means to that end”.  The quote explains that as long as someone loves God throughout their life, if they become ill euthanasia could become an option. As it allows them to die gracefully and have a chance to visit their family before they die.

In the case of Abortion the Catholic Church believes life starts at conception therefore abortion is murder, The Vatican council II teaches “never under any pretext may abortion be resorted to, either by a family or by the political authority”. At the moment of conception a life is made, so by aborting a baby it is like killing a grown man, to make it worst the baby is innocent it cannot protect itself. Therefore we must protect the baby by stopping abortions. However the view can be taken life begins at birth.

The view can be taken that life begins at birth and therefore abortion is acceptable, as the baby is not deemed to be alive then abortion does not infringe on the 5th commandment “ Thy shall not kill”  and the woman should therefore have the right to abort the baby. “Abolition of a woman's right to abortion, when and if she wants it, amounts to compulsory maternity: a form of rape by the State” Edward Abbey.

The Church of England believes that abortion is only acceptable under on two cases which are; when the mother’s life is at risk or in the case of a rape.

A Just War is where both nations agree to go to a war there must be a legitimate reason and no innocent people killed. The Church believes that war is wrong,

I believe that God gives life so only he should be able to take it away, however if a Just war is fought I believe that it can be legitimate. In the case of euthanasia I believe in pro-life as people who are terminally ill should not suffer. I also believe that abortion is murder as life begins at conception.