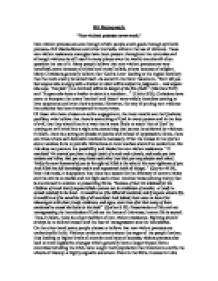 Christian Views on Protest and Violence. Many people believe that non-violent protests are very beneficial; some because of ethical and moral beliefs, others because of religion.

RE Homework "Non-violent protests never work." Non-violent protests are acts through which people attain goals through symbolic protests, civil disobedience and other methods, without the use of violence. These non-violent resistance strategies have been present throughout the centuries and although violence is still used in many places over the world, one should often question the use of it. Many people believe that non-violent protests are very beneficial; some because of ethical and moral beliefs, others because of religion. Many Christians generally believe that 'God is Love' leading to the logical corollary that the main enemy is hatred itself. As stated in the New Testament, "But I tell you that anyone who is angry with a brother or sister will be subject to judgment... And anyone who says, 'You fool!' [to a brother] will be in danger of the fire of hell." (Matthew 5:22) and "Anyone who hates a brother or sister is a murderer..." ...read more.

Verily the most honoured of you in the sight of Allah is (he who is) the most righteous of you. And Allah has full knowledge and is well acquainted (with all things)." (Qur'an 49:13), from this verse, it is apparent that there is a reason for the diversity of communities and the aim is to coexist and not fight each other. Another verse (among many) that is mentioned in relation to preserving life is; "Because of that We ordained for the Children of Israel that if anyone killed a person not in retaliation of murder, or (and) to spread mischief in the land - it would be as if he killed all mankind, and if anyone saved a life, it would be as if he saved the life of all mankind. And indeed, there came to them Our Messengers with clear proofs, evidences, and signs, even then after that many of them continued to exceed the limits in the land!" ...read more.

- This is, to some, a justification for either self-defence or righteous violence. Faced with detention without trial, torture, even murder by corrupt authorities, Christians who ask "What would Jesus do?" will get very different answers. Some say "Love your enemies" others say "Freedom for prisoners" and "release the oppressed". Ultimately, I believe that non-violent protests do work even though violent protests are more remembered, non-violence is more effective. As I stated above, non violence is not only morally correct, but also beneficial from a religious point of view. The problem with violent confrontation is with using violent strategies, they quickly escalate to the point where the parties' only worries are victory, revenge, and self-defence. In these cases, the moral arguments of people who are being unjustly treated become irrelevant. What matters is that they have used violent strategies and their opponent is, therefore, defensible in a violent response. This problem is complicated by the fact that both sides are usually able to dispute that the other side started the aggression. Therefore, nonviolence guarantees no automatic and unfailing success; no method of conflict resolution does. ?? ?? ?? ?? ...read more.