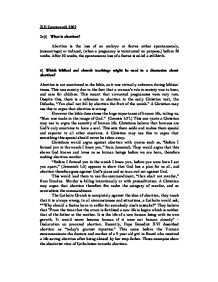 R.E Coursework 2302 2a)i) What is abortion? Abortion is the loss of an embryo or foetus either spontaneously, (miscarriage) or induced, (when a pregnancy is terminated on purpose,) before 20 weeks. After 20 weeks, the spontaneous loss of a foetus is called a stillbirth. ii) Which biblical and church teachings might be used in a discussion about abortion? Abortion is not mentioned in the bible, as it was virtually unknown during biblical times. This was mainly due to the fact that a woman's role in society was to bear, and care for children. This meant that unwanted pregnancies were very rare. Despite this, there is a reference to abortion in the early Christian text, the Didache, "You shall not kill by abortion the fruit of the womb." A Christian may use this to argue that abortion is wrong. However the bible does stress the huge importance of human life, telling us, "Man was made in the image of God." (Genesis 1:27.) This one quote a Christian may use to argue the sanctity of human life. Christians believe that humans are God's only creatures to have a soul. This sets them aside and makes them special and superior to all other creatures. ...read more.

and embryo research. The support a Christian offers to such organisations may be financial or as a volunteer. SPUC requires �2 million per year to run effectively, "counteract the culture of death in Parliament and to promote understanding in schools and colleges of the plight of the unborn." Due to the Christian belief that adoption is better than abortion, many Christians would either adopt or foster children, this can be done through Christian or non-Christian adoption agencies. This would also be an example of showing agape as it would be likely to give the children a better life. Christians believe, in almost all circumstances, that it is far better for a woman to have their child, than to have it aborted. This would lead them to offer assistance to those women who choose not to have an abortion. This assistance can come in various forms. Firstly, it can be financial. Offering monetary aid, (this can be done through Christian charities,) can help with clothing, food and other necessities for the child. Also, Christians could babysit children to ease strain on parents, making the raising of the child easier and less stressful for either couples or single parents. ...read more.

However, many may respond that this shows discrimination against disabled people, and this is completely unacceptable. In this circumstance, I feel that quality of life and sanctity of life must be balanced for a decision to be made. A Catholic would argue that sex should purely be for procreation and so abortion is unacceptable, those who undertake in sexual intercourse have to be willing to take the consequences of their actions. Catholics may also say that abortion is always murder as life begins at conception, and so abortion is always taking a life. However, different churches may feel that abortion can be acceptable, for example, the United Reform Church, who believe that life begins at quickening, the stage 16 or 17 weeks after contraception when the foetus begins to move when the foetus begins to move, and so abortion in the early stages of a foetus' development is acceptable. Many Christians would argue that abortion is unacceptable as adoption is always better that abortion. Therefore a Christian may say that abortion is always wrong as there is always a better option. However, this argument could be countered by the situation where a mother's life is endangered by the birth of a child, many would say that the right thing to do would be for the mother to have an abortion. ...read more.