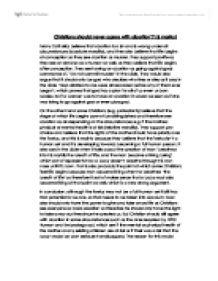 Christians should never agree with abortion'? (6 marks) Many Catholics believe that abortion is a sin and is wrong under all circumstances (absolute morality), and they also believe that life begins at conception so they see abortion as murder. They support pro-life as they see an embryo as a human as well, as they believe that life begins after conception. They see having an abortion as going against gods commands of, 'Do not commit murder' in the bible. They would also argue that it should only be god who decides who lives or dies as it says in the bible 'Days allotted to me were all recorded before any of them ever began', which proves that god has a plan for all of us even unborn babies. ...read more.

if the mothers physical or mental health is at risk (relative morality). They support pro-choice and believe that the rights of the mother should have priority over the foetus, and this is mainly because they believe that the foetus isn't a human yet and it is developing towards becoming a full human person. It also says in the bible when it talks about the creation of man 'breathed into his nostrils the breath of life, and the man became a living being' which sort of represents how a baby doesn't breathe through his own nose until it's born. ...read more.

God also should only have the power to give and take away life as Christians see everyone as Gods creation so therefore he should only have the right to take away our lives since he created us. But Christian should still agree with abortion in some circumstances such as the ones required by 1990 Human and Embryology act, which are if the mental or physical health of the mother or any existing children are at risk or if their was a risk that the baby would be born seriously handicapped. The reason for this would solely be to protect the people who are already alive and fully human which is very important for lots of Christians. ...read more.