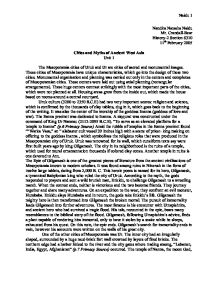 Nandita Natasha Naidu Mr. Crandall-Bear History-2 Section 6310 11th February 2005 Cities and Myths of Ancient West Asia Unit 1 The Mesopotamia cities of Uruk and Ur are cities of sacred and monumental images. These cities of Mesopotamia have unique characteristics, which go into the design of these two cities. Monumental organization and planning was carried out only in the centers and complexes of Mesopotamian cities. These centers were laid out using axial planning (rectangular arrangements). These huge centers contrast strikingly with the most important parts of the cities, which were not planned at all. Housing areas grew from the inside out, which made the house based on rooms around a central courtyard. Uruk culture (3200 to 2350 B.C.E) had two very important scores: religion and science, which is confirmed by the thousands of clay tablets, dug in it, which goes back to the beginning of the writing. It was also the center of the worship of the goddess Inanna (goddess of love and war). The Eanna precinct was dedicated to Inanna. ...read more.

According to the myth, the gods responded to prayers and sent a wild brutish man, Enkidu, to challenge Gilgamesh to a wrestling match. When the contest ends, neither is victorious and the two become friends. They journey together and share many adventures. On an expedition to the west, they confront an evil monster, Humbaba. Enkidu slays Humbaba and in return, the gods take Enkidu's life. Gilgamesh the mighty hero is then transformed into Gilgamesh the broken mortal. The pursuit of immortality leads Gilgamesh into further adventures. The most famous is his encounter with Utnapishtim, and ancient hero who had survived a tragic flood. His tale, recounted in the epic, bears many resemblances to the biblical story of the flood. Gilgamesh, following Utnapishim's advice, finds a plant capable of rendering him immortal, only to have it stolen by a snake while he sleeps, exhausted from his quest. On this note, the epic ends. Gilgamesh's search for immortality ends in vain, however his accounts were written on the walls of his great city. ...read more.

and various other cult buildings surrounding royal palaces that housed the royal family and other nobles. The most important structure to the city of Uruk had to be the temple build for Inanna. A whole precinct dedicated t her, to show every0ne the importance and holy temple. The ziqqurat build for Inanna shows also the worshipping and dedication to Inanna. Another temple built in ruins is the one devoted to Anu, god of the sky. Temples built to honor such Gods shows importance and hierarchy towards the gods. The most important city in Ur was the holy pyramid (Ziqqurat), which contained all the major temples together with the magnificent 3- ; eve; Ziqqurat built by Ur-Nammu, founder of the third Dynasty of Ur. Another prominent building was the palace of the king Shulgi, son of Ur-Nammu, located in the southern corner of the sacred area. Mesopotamian cities, known as temple communities, performed both political and religious roles, acting as mediators between the people and the gods. The tale of West Asia is interesting because it addresses many of humanity's eternal questions, including the meaning of friendship and the desire to be immortal. It also reflects ancient history, religion, and culture. ?? ?? ?? ?? Naidu 1 ...read more.