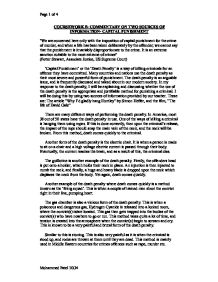 COURSEWORK B- COMMENTARY ON TWO SOURCES OF INFORMATION- CAPITAL PUNISHMENT "We are concerned here only with the imposition of capital punishment for the crime of murder, and when a life has been taken deliberately by the offender; we cannot say that the punishment is invariably disproportionate to the crime. It is an extreme sanction suitable to the most extreme of crimes" (Potter Stewart, Associate Justice, US Supreme Court) 'Capital Punishment' or the 'Death Penalty' is a way of killing criminals for an offence they have committed. Many countries and nations use the death penalty as their most severe and powerful form of punishment. The death penalty is an arguable issue, and is frequently discussed and talked about in our modern society. In my response to the death penalty, I will be explaining and discussing whether the use of the death penalty is the appropriate and justifiable method for punishing a criminal. I will be doing this by using two sources of information provided by our teacher. These are: The article "Why I'd gladly hang Huntley" by Simon Heffer, and the film, "The life of David Gale" There are many different ways of performing the death penalty. In America, most 38 out of 50 states have the death penalty in use. One of the ways of killing a criminal is hanging them using ropes. If this is done correctly, then upon the criminal's release, the impact of the rope should snap the main vein of the neck, and the neck will be broken. ...read more.

The methods of punishment in the UK is imprisonment, the maximum of this is life imprisonment, which is used in more extreme cases. The USA is a relevant source of evidence because American society is similar in some ways to the UK. David Gale had his life torn apart and was left in misery when he was falsely accused of raping and murdering one of his students. His respect was wiped out. David Gale wanted to prove that the death penalty is wrong and that innocent people may get executed for nothing. One of Gales' colleagues Constance, who worked with him for Death Watch (an organisation against the use of the death penalty) was very ill, and was dying from Leukaemia. To prove his point, Gale and his colleague set up a plan which would give the impression that he had raped and killed her, when in actual fact Constance had committed suicide. She firstly handcuffed herself and swallowed the key, and then suffocated herself by tying a bag around her neck. David Gale had sex with her and then she committed suicide like in the plan. Gale was falsely found guilty and was sentenced to the death penalty. After Gales' death a videotape showing how Constance really died was found and this proved his point that an innocent person may get executed, and for this he won the Nobel Prize. This source of information is effective because it affects the emotional side of its audience to prove just how wring executing criminals is. ...read more.

where the crime rate is very low and there is little or no crime; the level of crime in these places is considerably lower than here in the UK. With the death penalty in use, criminals will think twice before committing a crime, whereas if they commit a crime here, they know they will be allowed to live for free, feeding off the taxes of hard working people. After looking at the sources, the for and against, I would like to conclude that I am in favour of the death penalty because firstly, my religion teaches it and secondly, I believe that with the death penalty in use, there would be a lot less crime and corruption in our society today. There is the factor that the wrong person may get executed but I think the chances of this happening are very slim as nowadays, we have the aid of forensic science and DNA testing, which will ensure the wrong person doesn't get caught and justice will be done. I think criminals such as Ian Huntley who have been proven guilty, should not be allowed to live. Overall, I think that the issue of the death penalty is very fragile, complex and contentious issue and has both advantages and disadvantages to both sides, and although I feel there cannot be any 'right' or 'wrong' answer towards this issue, I feel we should be ready to reconsider the death penalty as I feel the advantages to this outweigh the disadvantages. ?? ?? ?? ?? Page 1 of 4 Mohammed Patel 10G4 ...read more.