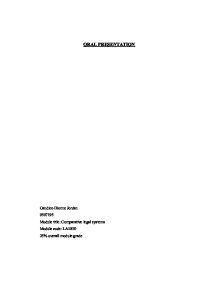 ORAL PRESENTATION Candice-Dionne Jordan 0507195 Module title: Comparative legal systems Module code: LA1850 25% overall module grade 1. In Furman v. Georgia 408 U.S. 238 (1972) the defendant Furman entered a home at night in an attempt to burgle it. During the attempt Furman was discovered by a member of the family, as he tried to leave the scene, he tripped and fell, which resulted in his firearm going off and the family member being shot through a closed door. Awaiting his trial Furman was committed to the Georgia State Hospital for a psychiatric examination, where the staff came to the conclusion that Mr Furman's mental deficiency was mild to moderate and he suffers psychotic episodes associated with convulsive disorder, however they stated at present Mr Furman knows right from wrong and is able to cooperate with counsel. Furman was convicted of murder and sentenced to death. In Gregg v. Georgia 428 U.S. 153 (1976) the petitioner and a travelling companion Floyd Allen, while hitchhiking north in Florida were picked up by their victims Fred Simmons and Bob Moore, Simmons and Moore's car broke down but they purchased another with some cash they were carrying and continued north. ...read more.

Under the Eighth Amendment, a punishment is considered unconstitutionally imposed if it administered arbitrarily or discriminatorily. In Furman the court successfully nullified the existing death penalty statues of 39 states, commuted the sentences of over 600 death row inmates around the country and suspended the death penalty. However the Furman decision triggered a backlash of state legislation and within months states began enacting new statues that they thought would reduce arbitrariness in capital sentencing. To tackle the unconstitutionality of unguided jury discretion, some states removed all of that discretion by mandating capital punishment for those convicted of capital crimes. However this exercise was also held to be unconstitutional by the Supreme Court in Woodson v. North Carolina, as it did not allow for considerations of individual differences among defendants. Other states wanted to focus the jury's discretion by providing sentencing guidelines to direct the jury when deciding whether to impose the death penalty. Georgia provided bifurcated proceedings, in which guilt and sentencing are determined in separate trails. During the penalty phase the jury must find at least one aggravating circumstance beyond reasonable doubt before considering the evidence and making a decision between life or death. ...read more.

No longer can a Georgia jury do as Furman's jury did: reach a finding of the defendant's guilt and then, without guidance or direction, decide whether he should live or die. Instead, the jury's attention is directed to the specific circumstances of the crime. The petitioner also argued that two of the statutory aggravating circumstances were vague and therefore predisposed to contradictory interpretations, therefore creating a sizeable risk of the death penalty being arbitrarily inflicted by Georgia state juries. The Supreme Court of Georgia, however, has demonstrated that the new sentencing procedures do provide guidance to juries. Furthermore, the court was not prepared to overrule the Georgia legislature's, finding that capital punishment serves as a useful deterrent to future capital crimes and an appropriate means of social retribution against its most serious offenders when it is not arbitrarily applied. The Supreme Court granted the Gregg's application for Writ of certiorari and affirmed the conviction and the imposition of the death sentences for murder, however The Supreme Court did lift Gregg's death sentence for armed robbery on the grounds that a death penalty has rarely been imposed in Georgia for that particular offence and found that the jury had improperly considered the murders as aggravating circumstances for the robberies after having considered the armed robbery as aggravating circumstances for murder. ...read more.