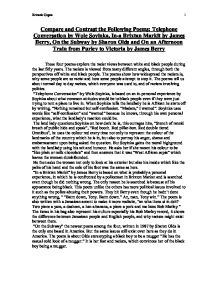 Compare and Contrast the Following Poems: Telephone Conversation by Wole Soyinka, In-a Brixtan Markit by James Berry, On the Subway by Sharon Olds and On an Afternoon Train from Purley to Victoria by James Berry.

Compare and Contrast the Following Poems: Telephone Conversation by Wole Soyinka, In-a Brixtan Markit by James Berry, On the Subway by Sharon Olds and On an Afternoon Train from Purley to Victoria by James Berry These four poems explore the racist views between white and black people during the last fifty years. The racism is viewed from many different angles, through both the perspectives off white and black people. The poems show how widespread the racism is, why some people are so racist and how some people attempt to stop it. The poems tell us about normal day to day racism, which everyone was used to, and of racism involving politics. "Telephone Conversation" by Wole Soyinka, is based on an in-personal experience by Soyinka about what common attitudes would be to black people even if they were just trying to rent a place to live in. When Soyinka tells the landlady he is African he starts off by writing, "Nothing remained but self-confession. "Madam," I warned". Soyinka uses words like "self-confession" and "warned" because he knows, through his own personal experience, what the landlady's reaction could be. The land lady questions Soyinka on how dark he is, this outrages him, "Stench of rancid breath of public hide and speak", "Red booth. Red pillar-box. Red double tiered Omnibus", he uses the colour red every time not only to represent the colour of the landmarks of the country which he is in, but also to portray his anger, shame and embarrassment upon being asked the question. ...read more.

Old's is scared of the boy just because of his appearance, for all she knows he could be the nicest boy in the world. She is also very up front with her racism, "he is black, and I am white, and without meaning or trying to I must profit from his darkness, the way he absorbs the murderous beams of the nation's heart, as black cotton absorbs the heat of the sun and hold it. She compares the black cotton as being all the black people and the sun as being the white. She also seems to be sympathising for the black people saying, "how easy this white skin makes my life", and, "this life he could take so easily and break across his knee like a stick the way his own back is being broken". She feels sorry for black people and what they must endure just because of the colour of their skin. "On an Afternoon Train from Purley to Victoria", written by James Berry in 1955 tells us of a Quaker (a member of a Christian group) trying to stop racism between black and white people, who met Berry on a train. Unlike everyone else on the train she tried to make small talk with Berry making meaningless comments such as about the weather. Then she recited a poem for racial brotherhood, "speak a poem loudly for racial brotherhood." ...read more.

Red pillar-box. Red double-tiered Omnibus" to show his anger. Also in "Telephone conversation" Soyinka changes his style in which he spoke with the landlady using humour, to tone her racism down and in "In-a Brixtan Market" Berry also has to change his tactic off conversation with the police man to control him. People looked at black people suspiciously just because they were different, the police man thought of Berry as a dodgy character, Olds thought the boy was a mugger and the landlady wouldn't let Soyinka rent the place just because he was black. So black people had to learn how to tackle these situations, like Soyinka demonstrated in "Telephone Conversation" and Berry did "In-a Brixtan Markit". "On the Subway" and "On an Afternoon Train from Purley to Victoria" show us how the stereotypical judge-mental views, which some people have, are completely wrong, "you can't judge a book by its cover". Even though in society now days people more than often do, judging people on their looks and first impressions rather than thinking what they are really like. Both "On the Subway" and "Telephone Conversation" are about people hastily jumping to conclusions, rather than thinking for themselves. The existence of racism itself has to do with the unfairness off people, who do not think off others and the consequences of their words. All the poems show what we should think before we make remarks or are unjust to someone just because of their colour. 1 1 Kritank Gupta ...read more.