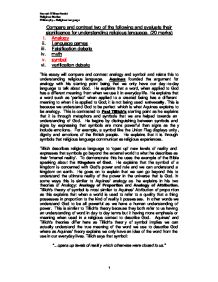 Compare and contrast two of the following and evaluate their significance for understanding religious language. (20 marks)

Compare and contrast two of the following and evaluate their significance for understanding religious language. (20 marks) i. Analogy ii. Language games iii. Falsification debate iv. myth v. symbol vi. verification debate This essay will compare and contrast analogy and symbol and relate this to understanding religious language. Aquinas founded the argument for analogy with his starting point being that we only have our day-to-day language to talk about God. He explains that a word, when applied to God has a different meaning from when we use it in everyday life. He explains that a word such as 'perfect' when applied to a created being has a different meaning to when it is applied to God; it is not being used univocally. This is because we understand God to be perfect which is what Aquinas explains to be analogy. This is contrasted to Paul Tillich's starting point as he explains that it is through metaphors and symbols that we are helped towards an understanding of God. He begins by distinguishing between symbols and signs by expressing that symbols are more powerful than signs as they include emotions. ...read more.

Having said this, Ian Ramsey has developed the theory of analogy in the twentieth century. Ramsey explained that if we say 'God is good' the model is the word 'good' so we have an understanding of the word 'good' therefore when applied to God we have a model understanding of God's goodness. However he goes on to explain that we have to adapt the model to quantify it so we realise that it is not literally what God is like. The qualifier can be a word such as 'ultimately' as this leads us to realising that God's goodness is greater than our own. Ian Ramsey's main function of religious language is not so much to describe religious facts about God but to express existential significance of God for mankind. Meaning he is trying to explain the important thing is to create an understanding of God which helps us to begin to understand God. Ramsey's main aim is to show that language used in religious context is less descriptive and dynamic and that its main purpose is to increase religious and moral awareness. This I contrasted to Tillich's theory of symbol as symbols are intended to convey facts and they cannot be falsified or verified empirically. ...read more.

As Tillich does not apply symbols to an objective reality, this means that many interpretations of symbols are available leading to people have different interpretations causing all of them to be regarded as highly insignificant. From these points considered above it is clear that Aquinas's theory of Analogy when used in religious language is more significant that Tillich's theory of religious symbolism. This is mainly due to the fact that analogy is easier to accept. We can all accept that we have an understanding of the word 'power' and that although we use this word in describing God we understand that we do not know the true extent of God's power because it is something a finite human has never experienced. Symbol has the added problem that it can become outdated and also that it can lead to symbols themselves becoming the focus of worship and the object of adoration. Aquinas' theory of Analogy of Proportion is more significant in religious language especially when backed up by Ian Ramsey's modern development of it. Personally I do agree that Aquinas' theory of Analogy is more significant in the context of religious language as it is easier to relate to and does not attempt to explain a fact which is inconceivable to finite human beings. Words = 1,513 Hannah O'Shea-Herriot Religious Studies Philosophy - Religious Language 1 ...read more.