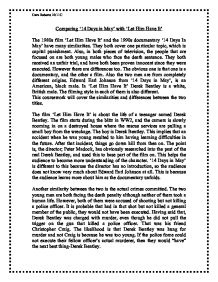 Comparing '14 Days in May' with 'Let Him Have It' The 1980s film 'Let Him Have It' and the 1990s documentary '14 Days In May' have many similarities. They both cover one particular topic, which is capital punishment. Also, in both pieces of television, the people that are focused on are both young males who face the death sentence. They both received an unfair trial, and have both been proven innocent since they were executed. However there are differences too. The obvious one is that one is a documentary, and the other a film. Also the two men are from completely different origins. Edward Earl Johnson from '14 Days in May', is an American, black male. In 'Let Him Have It' Derek Bentley is a white, British male. The filming style in each of them is also different. This coursework will cover the similarities and differences between the two titles. The film 'Let Him Have It' is about the life of a teenager named Derek Bentley. The film starts during the blitz in WW2, and the camera is slowly zooming in on a destroyed house where the rescue services are pulling a small boy from the wreckage. ...read more.

When he finally went out into the open, he met Christopher Craig, which is when the trouble started. Christopher Craig was cocky, confidant and everything else that Bentley wanted to be. Unbeknown to him though, Craig was a criminal who owned lots of guns; and was not afraid to use them. Craig had decided that Bentley was going to be his friend, and because he had low self esteem and no other friends, Bentley was not about to argue. All these events and situations lead up to the shooting of a police officer, which Bentley got the blame for. On the other hand, Edward Earl Johnson was in a completely different situation. He had not been involved in a bad crowed of people or have learning difficulties or no friends. He came from a poor, working class, black family. That was exactly the problem. The police arrested him because he was a young black male, which fitted the description some witnesses' gave of the alleged robber. However, Johnson had an alibi for the time of the robbery, the police knew this but they still arrested him. Edward Earl Johnson was clerly a victim of racism. ...read more.

It is a very powerful and disturbing image not only because the animal is brutally killed, but also because countless people have been killed in the same way; guilty or not. Overall, the film and documentary makers both achieved what they wanted, which was to uncover the injustices committed by the legal systems in all countries. They show how even the rule makers which society is built on are corrupt, and most of the time, citizens are powerless against their decisions. It does not matter how obviously wrong the state is, they are blinded by power, money and personal issues. These mistakes are not accidents though, and cost innocent peoples lives'. In my opinion, capital punishment is a mistake that can cost innocent peoples lives'. The people who run the country have personal insecurities and think that criminals are born not made, so therefore must die. Capital punishment is a quick and easy solution to an ever growing, complex problem. These programs show two innocent men who are sacrificed due the governments' inadequacies. They manage to convey the trauma the victim and their families go through without making it unoriginal and melodramatic like a lot of other features based on true stories. They are both very good pieces of television, however similar or different they are from each other. Cara Roberts 10/11C ...read more.