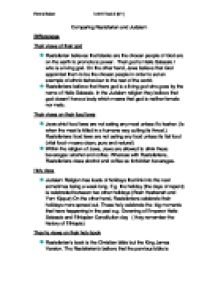 Comparing Rastafarian and Judaism Differences Their views of their god * Rastafarian believes that blacks are the chosen people of God are on the earth to promote is power. Their god is Haile Selassie I who is a living god. On the other hand, Jews believe that God appointed them to be the chosen people in order to set an example of ethnic behaviour to the rest of the world. * Rastafarians believe that there god is a living god who goes by the name of Haile Selassie. In the Judaism religion they believe that god doesn't have a body which means that god is neither female nor male. ...read more.

E.g. the holiday (the days of repent) is celebrated between two other holidays (Rosh Hashanah and Yom Kippur) On the other hand, Rastafarians celebrate their holidays more spread out. These holy celebrate the big moments that have happening in the past e.g. Crowning of Emperor Haile Selassie and Ethiopian Constitution day ( they remember the history of Ethiopia) They're views on their holy book * Rastafarian's book is the Christian bible but the King James Version. The Rastafarian's believe that the pervious bible is corrupt and this is the closest to the original. The Jew's book is called the Tanach which is the Hebrew Bible. ...read more.

E.g. colds. A Jews only medical belief is applied for boys at 8 days old. It's for the boys to get circumcised. Similarities Views on food laws * Rastafarians aren't allowed to eat no shell fish or fish in general without scales. Also pork is condemned amongst this religion. These views are similar to Jews because Jews can't eat any pork and can only eat fish which still contains scales, fins and backbones. Their views on Holy days * Within the Judaism religion, Jews celebrate Hanukkah as their Christmas which represents the festival of lights on 25th December. Also Rastafarians celebrate their Christmas on the 7th January which is represents the Ethiopians "Rastafarians regard blacks as the Jews of the bible". ?? ?? ?? ?? Emma Baker Unit 6 Task 2 (M1) ...read more.