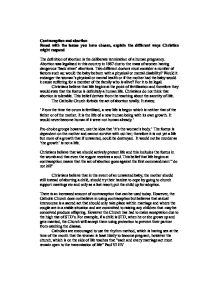 Faced with the issues you have chosen, explain the different ways Christian might respond

The definition of abortion is the deliberate termination of a human pregnancy.  Abortion was legalised in this country in 1967 due to the mass of women having dangerous ‘back street’ abortions. Two different doctors must consider a number of factors such as; would the baby be born with a physical or mental disability? Would it endanger the woman’s physical or mental health or if the mother had the baby would it cause suffering for a member of the family who is alive? For it to be legal.

Christians believe that life begins at the point of fertilisation and therefore they would state that the foetus is definitely a human life. Christians do not think that abortion is tolerable. This belief derives from the teaching about the sanctity of life.

The Catholic Church forbids the act of abortion totally. It states;

‘ From the time the ovum is fertilised, a new life is begun which is neither that of the father or of the mother. It is the life of a new human being with its own growth. It would never become human if it were not human already.’

Pro-choice groups however, use the idea that ‘it’s the woman’s body.’ The foetus is dependent on the mother and cannot survive with out her; therefore it is not yet a life but more of a growth that if unwanted, could be destroyed.  It would not be murder as ‘the growth’ is not a life.

Christians believe that we should actively protect life and this includes the foetus in the womb and that even the zygote receives a soul. This belief that life begins at contraception means that the act of abortion goes against the first commandment “ do not kill”

Christians believe that in the event of an unwanted baby, the mother should still instead of aborting a child, should try their hardest to cope by going to church support meetings etc and only as a last resort; put the child up for adoption.

There is an increased amount of contraception that can be used today. However, the Catholic Church does not believe in using contraception but believes that sexual intercourse is a sacred act that should only take place within marriage and where the couple are in a stable situation and are committed to raising any children that may be conceived produce offspring. However the Church has had to make acceptation due to the high rise of STD’s. For example, if a child is STD, when he or she grows up and gets married, the Church will accept them using protection to prevent their partner from catching the disease.

Catholics are encouraged to use the rhythm method, which is having sex at the time of the month that the woman is least likely to become pregnant, however the church, which is on the side of life teaches that “each and every marriage act must remain open to the transmission of life” Paul VI HV