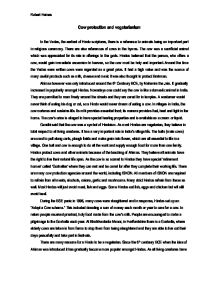 Cow protection and vegetarianism In the Vedas, the earliest of Hindu scriptures, there is a reference to animals being an important part in religious ceremony. There are also references of cows in the hymns. The cow was a sacrificial animal which was appreciated for its role in offerings to the gods. Hindus believed that the person, who offers a cow, would gain immediate ascension to heaven, so the cow must be holy and important. Around the time the Vedas were written cows were regarded as a great prize. It had a high value and was the source of many useful products such as milk, cheese and meat. It was also thought to protect Brahman. Ahimsa however was only introduced around the 6th Centaury BCE, by Mahavira the Jain. It gradually increased in popularity amongst Hindus. Nowadays one could say the cow is like a domestic animal in India. ...read more.

Hindus protect cows and other animals because of the teaching of Ahimsa. They believe all animals have the right to live their natural life span. As the cow is so scared to Hindus they have special 'retirement homes' called 'Goshallas' where they can rest and be cared for after they complete their working life. There are many cow protection agencies around the world, including ISKON. All members of ISKON are required to refrain from all meats, alcohols, onions, garlic and mushrooms. Many strict Hindus refrain from these as well. Most Hindus will just avoid meat, fish and eggs. Some Hindus eat fish, eggs and chicken but will still avoid beef. During the BSE panic in 1996, many cows were slaughtered and in response, Hindus set up an "Adopt a Cow scheme." This included donating a sum of money each month or year to care for a cow. ...read more.

Meat, eggs, fish and other animal foods increase anger levels. An important concept in Hinduism is that all living and non living objects have 3 basic qualities, the 3 Gunas. Sattvic is a positive and knowledgeable mind and is pure and clam. Rajastic is a neutral mind and is involved in worldly actions. Tamasic is a negative mind which is stagnant and ignorant. These qualities are said to be found in foods. Sattvic foods include milk, fruit and vegetables. Meats and eggs are linked with a Rajasic mind. Over ripe fruits and rotten foods will lead to a Tamasic mind. Medical research shows that a vegetarian diet is easier to digest and provides better nutrients; Meat is unhealthy as it contains preservatives and poisons. Vegetarians are healthier than others and consequently live longer. Their immune systems are stronger and their bodies are unpolluted. It is much better to use natural resources and help preserve the environment. Hindus believe that should have a vegetable diet rather then killing animals. ?? ?? ?? ?? Robert Haines ...read more.