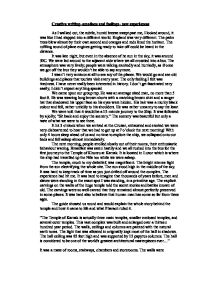 Creative writing- emotions and feelings- new experiences As I walked out, the subtle, humid breeze swept past me, I looked around, it was like I had stepped into a different world. England was very different. The palm trees blew almost by their own accord and oranges and reds lined the horizon. The ruffling sound of plane engines getting ready to take off could be heard in the distance. It was late night, but even in the absence of he sun in the sky, it was around 30C. We were led around to the adjacent side where we all crowded into a bus. The atmosphere was very lively; people were talking excitedly and hurriedly, as if once we got off the bus they wouldn't be able to say anymore. I wasn't very anxious at all to see any of the places. We would go and see old buildings and places that tourists visit every year. The only feeling I felt was tiredness. I have never really been interested in history. I don't get fascinated very easily, I didn't expect anything special. We came upon our group rep. He was an average sized man, no more than 5 foot 8. ...read more.

"The Temple of Karnak is actually three main temples, smaller enclosed temples, and several outer temples. This vast complex was built and enlarged over a thirteen hundred year period. The walls, ceilings and columns are painted with the natural earth tones. The light that was allowed in originally kept most of the hall in shadows. The hall ceiling was 82 feet high and was supported by 12 papyrus columns. The hall is considered to be one of the world's greatest architectural masterpieces ever..." It was a maze of rooms, stairways, chambers and storerooms. The walls were made from solid stone. They were beige in colour but judging from bits of colour that had survived, it was clear that this temple used to be covered in colour, gold and riches. A profound contrast. Crushed rock and stone covered the floor like a huge carpet. The sky was bright blue but hard to see in the radiance of the sun. A cloud couldn't be seen for miles around. The colossal accomplishments of the these people could undoubtedly be seen. As the day drew to a close, our group reformed and we travelled back quietly, leaving time to ponder the magnificent things we had seen. ...read more.

A huge light fell on the second part of the temple. The story carried on to reveal even more strange things about ancient curses and sacrifices to the Gods. The huge pillars that lined the temple lead off into the night and an ancient bathe stood in all its glory, fed from the River Nile. The splendour of the show went on for another hour. We all split up at the end and I found myself in a part of the temple I didn't recognise. People were there but they were indigenous to the country and seemed to work there but didn't speak English very well. It was pretty dark. My sister and parents were probably waiting for me anyway and I had time as I didn't think I was the only one taking my time to get out. The gigantic temple felt as though it were a prison, holding many unknown revelations and secrets never whispered for thousands of years. I wondered around for a while and stumbled on the exit rather by chance than by way of direction. This journey was like travelling back in time. Although I wasn't very enthusiastic about it, I was proved wrong about the very nature of the trip and it was an experience to remember. The bus was waiting and me and others rushed into the already filled bus for our return journey to the ship, airport and home! ...read more.