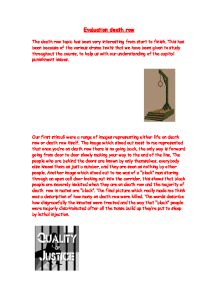 The death row topic has been very interesting from start to finish. This has been because of the various drama texts that we have been given to study throughout the course, to help us with our understanding of the capital punishment issues.

Our first stimuli were a range of images representing either life on death row or death row itself. The image which stood out most to me represented that once you’re on death row there is no going back, the only way is forward going from door to door slowly making your way to the end of the line. The people who are behind the doors are known by only themselves, everybody else knows them as just a number, and they are seen as nothing by other people. Another image which stood out to me was of a “black” man staring through an open cell door looking out into the corridor, this shows that black people are severely isolated when they are on death row and the majority of death row in mates are “black”. The final picture which really made me think was a description of how many on death row were killed. The words describe how disgracefully the inmates were treated and the way that “black” people were majorly discriminated after all the tense build up they’re put to sleep by lethal injection.

The next stimulus we were shown was an extract from a book called “The Outsider”. This extract highlighted the bare casualness of killing someone on a daily basis. This is backed up by what it says in the extract that the machine is “very well looked after” in a way that is respected by the people who are killing the criminals and it shouldn’t be at all because it is destroying peoples lives and is totally inhumane. The penultimate drama text which we studied was an article from the daily mirror with a list of all the people who have been killed in Texas due to the death penalty, reading the article I realised just how overpowering the death penalty is. Guilty or not many people have had their lives taken from them. This shows that the only thing that has changed with the death penalty is the method in which people are executed, meaning still in today’s day and age people are falsely sentenced to death for a crime that they have not committed.

The final stimulus we were shown was a documentary called “The Death of a Teenage Girl”, watching this proved that the judicial system was unjust as they never found out the age of the girl in question and whether the crime that they are accusing her of committing was even her fault. The documentary was not set in America therefore showing us that the death penalty is not only used in the USA. After studying the four different drama texts I have a stronger understanding of the death penalty and how different coloured people are discriminated. The different pictures which I have studied taught me that if you were “black” you were much more likely to be sentenced to death, whether you have committed the crime or not. Watching the documentary on the Iranian girl made me feel for her family and made me more against the death penalty than ever before. However after reading the extracts from the daily mirror and some of the crimes which people had committed I then swayed in favour of the death penalty. I now have a much clearer view on the death penalty; I believe that taking somebody’s life is totally wrong and inhumane. Executing somebody for heinous crime is a cheap and easy way out and this is why lots of governments do it for their financial benefit, as life imprisonment can be very expensive. A murderer should suffer the consequences. Using four different drama texts has given us a wider knowledge of the death penalty, and gives us the opportunity to interpret it in our own way.

In my monologue I began sat on the floor with my head down huddled up holding my knees. To deliver my first line I lifted my head “I have nothing left in my life, except this place,” this suggests that I have given up and have realised that my life is going to come to an end. “These walls, they whisper to you at night and heckle you in the morning” This line shows how hard death row can be how it changes you and plays games with your mind. I started by using a subtle tone of voice, virtually whispering to the audience. As I progressed through my monologue I would become very emotional and begin to have a tear in my eye as I apologise for the crimes which I have committed. As I deliver other lines I would begin to shout and get angrier to show how frustrated and agitated I am with the past and how I shouldn’t have been so small minded. I am trying to be seen as someone who is deeply remorseful for what I have done. I show this by saying “And I regret what happened and I want you to know that I am sorry.” The newspaper articles which we were given helped a lot as I could pick somebody at random and make my own interpretation of them.

The execution scene I did was also very effective, to help our group we used “The outsider” and that how casual the deaths were so we tried to mirror this in our scene by just having us all walk off in a line. I found the last meal very interesting as we had to choose one character and then we had a free reign and were able to improvise and we used cross-cutting to make this much more effective. My group chose a young man who wanted a burger and fries for his meal, we set the scene in his local burger bar and he ended up getting frustrated with the service and shooting one of the staff. I enjoyed this scene as we could improvise as much as we wanted and the end product left the audience stunned and open mouthed.

We also had chance to watch other peoples monologues, one which stood out to me was Claire’s because she started huddled up in the corner which showed how timid and shy she had become after spending time on death row. She is rocking back and forth which also shows that she could have a mental condition. She soon stands up and when she does she effectively shows great emotion through her voice – it sounds like she is crying but it does not sound pathetic. I thought this really showed of her character.

The other monologue I thought that stood out was Josh’s his was different to everybody else’s. Instead of starting with how he felt or whether he was guilty or not he had a different twist. He started it as if we were at a funeral and he was a vicar conducting his own funeral, I thought this was unusual and imaginative and it stood out to me. He then asks rhetorical questions to the audience such as “why are you here?” this is a perfectly good question and if people were horrified by the crime he had committed why would they now be there watching him die? The monologues helped with our understanding of the death penalty because it showed how people used to live normal lives and it makes you think what society they used to live in if people are coming to watch others be killed but yet they do not agree with murder. Also shows that people were sentenced to death even if they were not guilty which makes me realise that we are lucky not to have capital punishment in England.