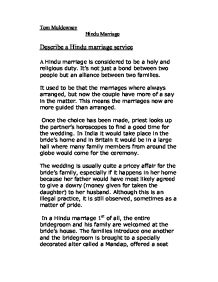 Tom Muldowney Hindu Marriage Describe a Hindu marriage service A Hindu marriage is considered to be a holy and religious duty. It's not just a bond between two people but an alliance between two families. It used to be that the marriages where always arranged, but now the couple have more of a say in the matter. This means the marriages now are more guided than arranged. Once the choice has been made, priest looks up the partner's horoscopes to find a good time for the wedding. In India it would take place in the bride's home and in Britain it would be in a large hall where many family members from around the globe would come for the ceremony. The wedding is usually quite a pricey affair for the bride's family, especially if it happens in her home because her father would have most likely agreed to give a dowry (money given for taken the daughter) to her husband. Although this is an illegal practice, it is still observed, sometimes as a matter of pride. In a Hindu marriage 1st of all, the entire bridegroom and his family are welcomed at the bride's house. ...read more.

"This grain I spill. May it bring to me well-being and unite you to me. May Agni hear us?" He then causes the bride to spill the grain into the fire, saying:" This woman scattering grain into the fire, prays: Blessings on my husband. May my relatives be prosperous? 'Svaha!' " The bridegroom holds the bride by the hand and both walk three times around the nuptial fire. Both offer oblations and recite appropriate Vedic hymns to Gods for prosperity, good fortune, and conjugal fidelity. They touch each others heart and pray for union of their hearts and minds While walking around the bridegroom repeats: "First now they bring to you in bridal procession this Surya, guiding her steps in circular motion. Return her now, O Agni, to her husband as rightful wife, with hope of children to come." Then the entire rite is repeated twice more, beginning with the rite of the fried grain. At the fourth round she pours into the re all the fried grain from the mouth of the winnowing basket saying: "To Bhaga svaha!" ...read more.

Let me not be severed from your friendship. Let your friendship not be severed from me." The Spatapadi ceremony ceremony concludes with a prayer that the union is indissoluble. At the end of this ceremony, the bridegroom and bride become husband and wife. In some communities such as Gujarati, instead of seven, only four steps, signifying Artha, Dharma, Kama and Moksha are taken. Once this has happened it is the viewing of the pole star. If the wedding is in the daytime, the couple will look at the sun (surya darshan) in order to be blessed, and if it is at night they will look in the direction of the pole star. The wife resolves to be unshaken and steadfast like the star. (the pole star is dhruva, constant. May I be dhruva in my husband's family?) The blessings. The couple are blessed by the elders and the priest for a long and prosperous married life. This will be followed by a scruptuous feast to impress all the guests. When the bride enters the house of her husband's family for the first time, she has one more ceremony to perform. She must kick over metal pot containing wheat with her right foot so that the grain, split over the threshold, signifies she will bring prosperity. ...read more.