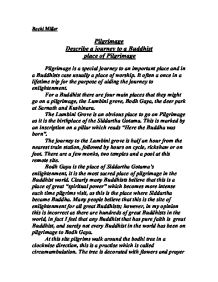 Describe a journey to a Buddhist place of Pilgrimage.

Becki Miller Pilgrimage Describe a journey to a Buddhist place of Pilgrimage Pilgrimage is a special journey to an important place and in a Buddhists case usually a place of worship. It often a once in a lifetime trip for the purpose of aiding the journey to enlightenment. For a Buddhist there are four main places that they might go on a pilgrimage, the Lumbini grove, Bodh Gaya, the deer park at Sarnath and Kushinara. The Lumbini Grove is an obvious place to go on Pilgrimage as it is the birthplace of the Siddartha Gotama. This is marked by an inscription on a pillar which reads "Here the Buddha was born". The journey to the Lumbini grove is half an hour from the nearest train station, followed by hours on cycle, rickshaw or on foot. There are a few monks, two temples and a pool at this remote site. Bodh Gaya is the place of Siddartha Gotama's enlightenment, it is the most sacred place of pilgrimage in the Buddhist world. Clearly many Buddhists believe that this is a place of great "spiritual power" which becomes more intense each time pilgrims visit, as this is the place where Siddartha became Buddha. Many people believe that this is the site of enlightenment for all great Buddhists; however, in my opinion this is incorrect as there are ...read more.

They might also go to share their thoughts and the teachings of the Buddha with other Buddhists and with the Buddhist monks, this could help them to understand from different points of view of other Buddhists as well as their own and increase their knowledge. They might also learn in more depth about the four noble truths and the three marks of existence from other Buddhists and monks, not only that but they might actually see evidence of them. For example at Kushinara they would see examples of Dukkha because they would see that even the Buddha died. Pilgrimage should be a life changing and significant event which should have a great impact on their life as they are going to places where their "idol" has been and where significant changes were made to his life. They should feel privileged that they are where the Buddha was this should help to bring them closer to the Buddha and walk in his footsteps perhaps even to bring them closer to the way that the Buddha thought and felt whilst he was in these places , in turn giving them good Karma and helping them to understand his teachings more clearly than before. Some Buddhists may go on pilgrimage in order to rekindle lost faith or just simply to strengthen faith further. ...read more.

However, the money that could be spent on a pilgrimage could be donated to charity which would benefit a Buddhist greatly as they would gain good karma from such a selfless act. In my opinion a true Buddhist would not need to go on pilgrimage as they would feel that their faith was already strong enough, in the same way as a true Christian wouldn't have to go to church, if their faith was strong they wouldn't feel the need to constantly rekindle it. I feel that people go on pilgrimage not because they need to but because they want to. On the other hand from a Buddhists point of view if they really feel that it is a necessity to go on pilgrimage then they will go. A Buddhist may feel that they need to go in order to "pay their respects" to Buddha in the same way as we do if a member of our family or a close friend of ours has died. They may also feel that by going on pilgrimage they could relive the life of the Buddha and this may be very important for a Buddhist. In conclusion, from a Buddhists point of view it is probably very necessary to go on pilgrimage, they might not want to go for any other reason than to get closer to the Buddha or just to try to become a better Buddhist or even a better person overall. ...read more.