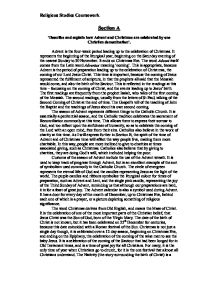 'Describe and explain how Advent and Christmas are celebrated by one Christian denomination'.

Section A 'Describe and explain how Advent and Christmas are celebrated by one Christian denomination'. Advent is the four-week period leading up to the celebration of Christmas. It represents the beginning of the liturgical year, beginning on the Saturday evening of the nearest Sunday to 30 November. It ends on Christmas Eve. The word Advent itself comes from the Latin word Adventus meaning 'coming'. This is appropriate, because Advent is the period of preparation leading up to the celebration of Christmas, the coming of our Lord Jesus Christ. This time is important, because the coming of Jesus represented the fulfilment of scripture, in that the prophets all said that the Messiah would come, and also the birth of the Saviour. This is reflected in the readings at this time - focussing on the coming of Christ, and the events leading up to Jesus' birth. The first readings are frequently from the prophet Isaiah, who talks of the first coming of the Messiah. The second readings, usually from the letters of St Paul, talking of the Second Coming of Christ at the end of time. The Gospel's tell of the teaching of John the Baptist and the teachings of Jesus about his own second coming. The season of Advent represents different things to the Catholic Church. It is essentially a penitential season, and the Catholic tradition celebrates the sacrament of Reconciliation commonly at this time. ...read more.

AT this time, these charities campaign in the spirit of Christmas for help for the poor and homeless in the world, both in Britain and abroad. The Salvation Army is particularly active at Christmas time, providing shelter and food and drinks for the homeless on the UK's streets. Charities might organise carol-singing events, in public places, or outside people's houses. Carol singing is one of the most effective ways of putting over the message of Christmas, as they tell either part of the Nativity story, or of the salvation it brought humanity or just project the joy of the season. The atmosphere at Christmas is different than at any other time of year. Part of the 'magic' of Christmas is that wherever you go, people will be happy. On Christmas Day, the streets are almost empty, and the shops are all closed, as every one spends the day with their families. The joy of being with loved ones, giving and receiving gifts in turn, and enjoying their time off work, creates an amazing atmosphere that you will not find at any other time of the year. This atmosphere can change even the most hard-hearted people into people who care, and even they join into the festivities. Just think of the story of Scrooge, told in A Christmas Carol by Charles Dickens. On eof the most cold-hearted people imaginable was softened and humbled by the spirit of the celebration, and was able to join in. ...read more.

They use the Advent Wreath or Advent Calendars to check on their progress through Advent towards Christmas. At Christmas itself, there is a special mass on Christmas Eve, to mark the festival of Christmas, and to listen to the story of the incarnation as told in the gospels. I would say that, in conclusion, Christmas cannot be written off in terms of its religious values. It is a time of national celebration in Britain, and there is a lot of commercial interest in the festival. The festival does however still incorporate a large number of the Christian messages that it should do. The food drink and party side of the festival are part of Christian togetherness, and it promotes the coming together of families, and, through Christmas cards, it also makes people communicate with people over long distances who they normally would not have time for. In this way, some of the key Christian messages - 'Love your neighbour' for example - are still very much evident. The birth of Christ is still important to the Christian population, and although many non-Christians join in the celebrations with presents and parties, this in my view does not detract from the religious significance of the festival. Humanities salvation is still celebrated by the birth of Christ at Christmas to those for whom it is important, and for those who don't celebrate the meaning, they celebrate the importance of family and friends, and the joy of celebration. Both can be equally important. Religious Studies Coursework ...read more.