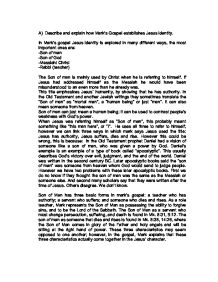 A) Describe and explain how Mark's Gospel establishes Jesus identity. In Mark's gospel Jesus identity is explored in many different ways, the most important ones are: -Son of man -Son of God -Messiah/ Christ -Rabbi (teacher) The Son of man is mainly used by Christ when he is referring to himself. If Jesus had addressed himself as the Messiah he would have been misunderstood to an even more than he already was. This title emphasizes Jesus� humanity, by showing that he has authority. In the Old Testament and another Jewish writings they sometimes translate the "Son of man" as "mortal man", a "human being" or just "man". It can also mean someone from heaven. Son of man can just mean a human being; it can be used to contrast people's weakness with God's power. When Jesus was referring himself as "Son of man", this probably meant something like "this man here", or "I". He uses all three to refer to himself, however we can link three ways in which mark says Jesus used the title: Jesus has authority, Jesus suffers, dies and rise. However this could be wrong, this is because: In the Old Testament prophet Daniel had a vision of someone like a son of man, who was given a power by God. Daniel's example is an example of a type of book called "apocalyptic". This usually describes God's victory over evil, judgment, and the end of the world. Daniel was written in the second century BC. ...read more.

Jesus was also called 'rabbi' by His own disciples; by those who wanted help; by Peter himself and even by Judas as he kisses him. Rabbi can also mean a teacher. In the time of Jesus Rabbi was a form of address, equivalent to 'sir' but by the end of the century and was used to referring to a teacher. In Mark's gospel only two people call Jesus Rabbi, one of them is, and the other one is Judas. b) Discuss the importance of Jesus being the Son of God to Christians today. For Christians today "son of god" can mean various things: Jesus as divine: In Christianity the title of Son of God is used to describe Jesus as a divine being and a member of the Trinity. Jesus as godly: Another view is that, Jesus styled himself the Son of God in the same sense as a good person was sometimes referred to as a son or child of God (though not The Son of God). Christians as children of God: The New Testament speaks of no individual Christian as it speaks of Jesus, as The Son of God. The importance for Christians today that Jesus is the Son of God can be for various reasons, for example the importance of healing miracles of Jesus for Christians is very important. This is because Christians can rely on these miracles to have faith in the Kingdom of God. If Jesus did not perform healing miracles then it destroys the image we see of Jesus. ...read more.

If, when Jesus made his claims, he knew that he was not God, then he was lying to his followers. But if he was a liar, then he was also a hypocrite because he told others to be honest, whatever the cost, while he himself taught and lived lie. Many will say that Jesus was a good moral teacher. But how could he be a great moral teacher and without knowing misleading people at the most important point of his teaching, his own identity? Christians think Jesus is just a good man for various reasons, one of them is because the idea of miracles was a very big thing for them, it made them have faith and believe in Jesus. If Christians didn't think as Jesus as the son of man or more than just a man, it wouldn't give them faith. Many Christians think he is a messenger from God, some believe he is just the Son of God. I thinks that Jesus is not just a man, if not he couldn't perform his miracles, so if he couldn't do that he would just be a teacher, but many Christians wouldn't think of him as the same way they do now. The idea of Jesus just being a good man could be misunderstood by many people, as the idea of Jesus just being a teacher. Jesus is more than just a man, if not Christians wouldn't have the faith and believe as they do today. Jesus is very important for many Christians today, if Jesus was just a good man he wouldn't be as important as he is now. ...read more.